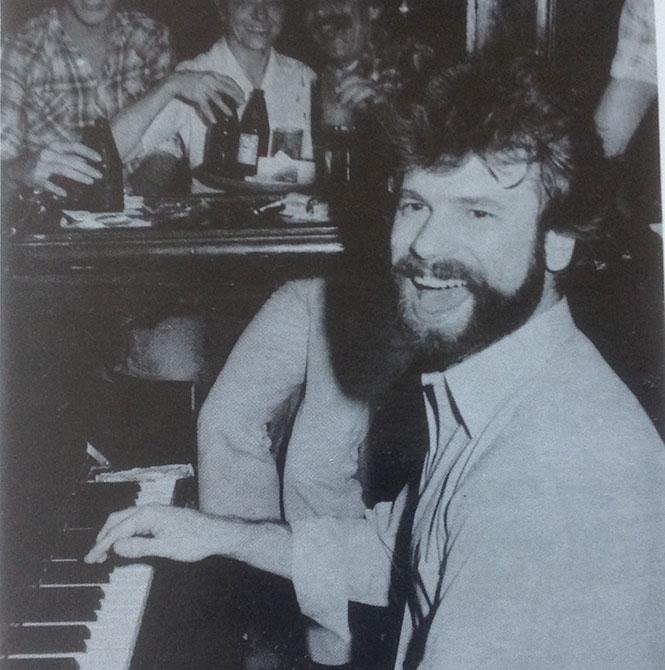 Frank Banks tickles the ivories at The Mint.

From 1975 to 1988 Frank Banks was both defined by and helped define The Mint (1942 Market) in San Francisco. He would go on to play other bars before he left and his presence here was felt all the way to City Hall, but The Mint was the place where he came alive and entertained a broad swath of the city.

Banks was born in Wagoner, OK, on May 11, 1946. His family moved to Albuquerque, NM, when he was a child and it was there that he first experienced the delight he felt while playing music for an audience. As a teenager he became church pianist at the First Baptist Church. 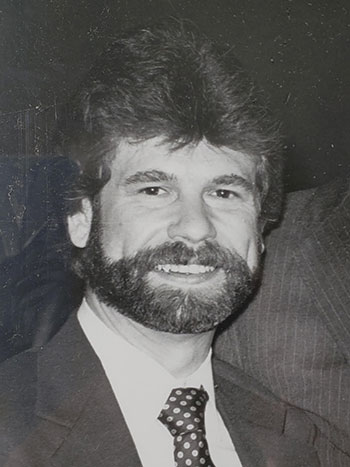 After becoming an English and music teacher in Albuquerque, he continued to entertain. From 1971 through 1974 he played piano at revival theaters during the summers, first at the Alpine Theater in Red River and then (for three years) at the Tiffany Saloon and Melodrama in Los Cerrillos. The small town knew it had a gem in Banks, as a reporter for the Albuquerque Tribune noted in 1972:

"One of the best things 'Egad!' has going for it is a rinky-tink pianist named Frank Banks. He really knows how to make that old piano roll. When he begins to play there's just no sitting still."

Following the summer theater season in 1974 he moved west to San Francisco. As Bay Area Reporter publisher emeritus Tom Horn (who met Banks at First Baptist Church) noted in an interview. "If there had been a gay piano bar there, he might have stayed in Albuquerque."

Banks was out in Albuquerque in the early '70s - Horn said "he checked the box" regarding military service in Vietnam. But San Francisco beckoned and offered a gay life that Albuquerque couldn't.

Once in town, he quickly established himself on the piano bar circuit and was playing at The Mint in 1976 when Horn followed Banks to San Francisco and became housemates with him. By 1977 (the first year his name appears in the entertainment listings in The San Francisco Chronicle) he was playing there Wednesday through Sunday weekly. 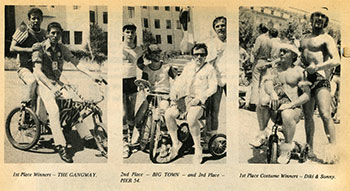 This arrangement with The Mint continued through the '80s. In December, 1985, regarding Googie's (688 Geary), B.A.R. columnist Sweet Lips wrote: "It is nice to have Frank Banks on the keyboard Sundays from 5 to 9, so come on down and enjoy."

Although he did not perform exclusively at The Mint, his performances there defined his piano bar career in San Francisco in two ways: by a live album and his performances at the Great Tricycle Race. 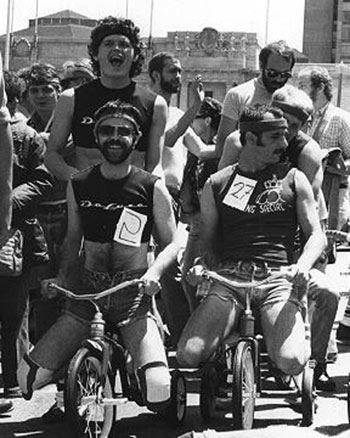 Frank Banks Live at The Mint was recorded in March and April, 1982. Although I found vendors for the album, I was somewhat surprised to find no reviews for it in either the music or the gay press. Horn provided an explanation for this:

"Frank's fans drove the album. They insisted that he must record live. The person who did the recording, a fan from San Anselmo, said, 'I'll set it up, I'll do the work.' And they simply set up a microphone and recorded him live in the bar."

Listening to the album is akin to using a time machine. The Mint was a lively bar, and you hear people laughing, glasses tinkling and most of all the rapport between Banks and his audience during sing-alongs.

Two songs on the album, "Oklahoma" and "I Cain't Say No," from Rogers & Hammerstein's Oklahoma, were a regular part of his repertoire, according to Tim Lewis (another piano bar musician who looked to Banks for inspiration), because of Banks' birthplace.

Other songs, "Broadway Baby," "New York New York" and "Lullaby of Broadway," reflected his love of musicals. Regarding this, Horn said, "He would get sheet music for plays as soon as they came out and once he had played them they were committed to memory." 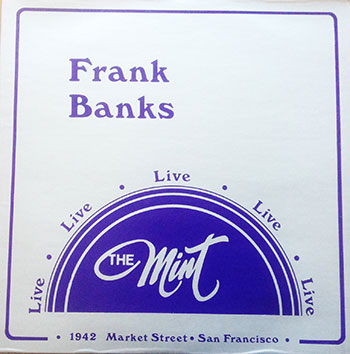 Because of his longtime connection to The Mint, it's no surprise that he was involved in entertainment for The Great Tricycle Race. The race, which began in 1972, grew out of a need to turn the Memorial Day holiday profitable for the bar.

Les Balmain, with help from other bartenders, came up with the idea of team tricycle races with one contestant pushing and the other on the tricycle that was a benefit for charities (guide dogs for the blind, Shanti and Ward 5-B, among others). Flamboyant costumes were part of race and afterward there was a party with music at The Mint.

Horn says that Banks was playing for The Tricycle Race from 1975 on, but 1984 is the first year he was featured in their ad: "The Incomparable Frank Banks at the Piano 6PM to 10PM."

This event was very well attended - a subsequent B.A.R. article noted there were over 1,200 people at the party in the parking lot next to the mint for a swimsuit contest at the 1984 event. 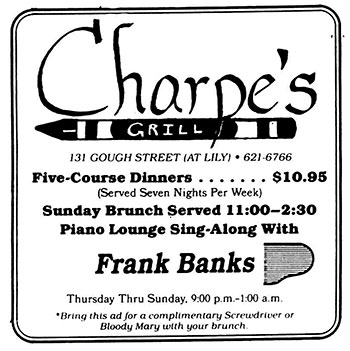 By the late 1980s, The Mint was shifting away from being a piano bar and Banks began playing at other venues in town, including J.J.'s, Nine's, Sutter's Mill and Charpe's. He also drew attention from other quarters in town.

Horn, who is on the War Memorial trustee's board, remembered that after a meeting in the '80s, then-Mayor Diane Feinstein stopped by Horn's and Banks' house. Although she initially demurred, she stayed for a sing-along and had quite a good time. Horn remembers her request of "La Vie en Rose," which of course was in Banks' repertoire. From then on Banks counted the Mayor as a fan.

If there was one showbiz cliché which typified Banks, it was that the show must go on. He continued to play for his "children" (as he called his fans) until a final performance at the Square Bar (405 Mason) on August 29, 1992. Less than six months later he was dead from AIDS, back in Albuquerque at age 46.

Banks seems to have been ignored in the press. There is very little in the written record about him. It could be because of the explosion of talent, or that musicians in piano bars were not considered "serious" performers.

But it is obvious that someone who was nominated for two Cable Car awards as "Entertainer of the Year" deserves to be remembered. His talent and the memory of the Mint as a piano bar, lives on in the recording that his fans made sure we would have today.