Our Lady of the Phone Booth 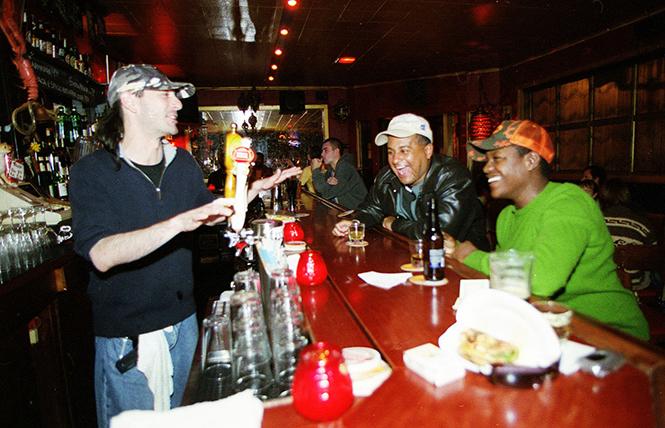 What motivated people to own gay bars when they could be raided by police or the Alcohol Beverage Control board? Money was one factor. For Doris Jennings, opening Club Dori was a good way to make a living.

For others like The Black Cat's Sol Stoumen, there may have been a political impulse: the notion that the government couldn't tell him who he could serve in his bar. 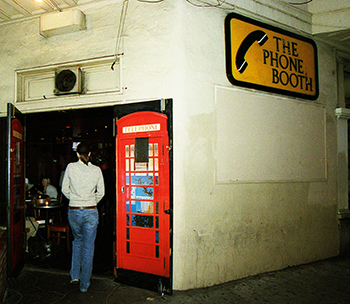 Outside The Phone Booth in 2005. Photo: Rick Gerharter

Yet for others, the sense of camaraderie with like-minded people seems to have been primary. This seems to be what motivated Linda Pancost, owner of the Tower Lounge (1488 Pine Street) and the Phone Booth (1398 South Van Ness Avenue).

Pancost was born Evelyn Forbes in Kalamazoo, Michigan in 1920 and picked up the name Pancost during a five-year marriage that ended in divorce in 1942. Somewhere between then and 1950, she moved to San Francisco.

The City by the Bay must have seemed quite welcoming, at least at first. In 1951 she was named as "one of the other women" in a divorce case in San Francisco. She did not take kindly to the Chronicle photographers attempting to photograph her for the paper. 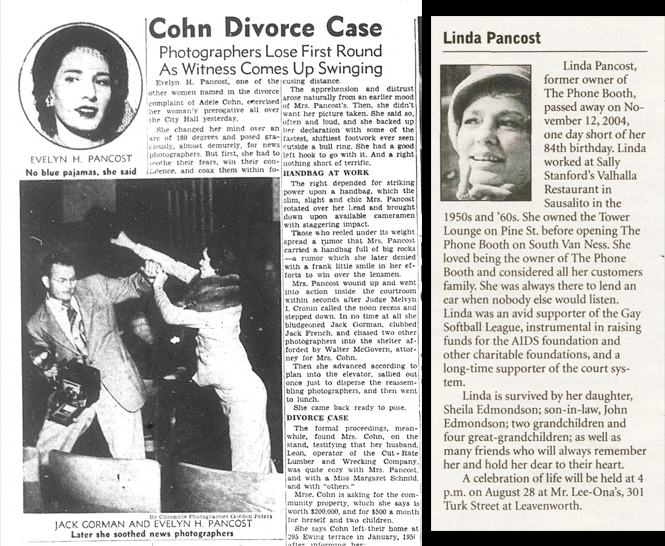 A May 30, 1951 article reported: "She didn't want her picture taken. She said so loud and often and she backed up her declaration with some of the fastest, shiftiest footwork ever seen outside a bull ring. She had a good left hook to go with it - and a right nothing short of terrific."

With divorce proceedings behind her, Pancost worked as a hostess at the Curtain Call (456 Geary) in the early 1950s. It was a piano bar that had Marlene Dietrich, Joan Blondell and Ricardo Montalban among its patrons (and later had David Kelsey at the keyboards).

By the late '50s, Pancost was working at former San Francisco madam Sally Stanford's Valhalla in Sausalito - although Stanford (who had a good eye for publicity) posed her in a Chronicle photo as a patron in May 1957 in an article discussing how apartments would wreck the restaurant's view. It was also at Valhalla that Pancost worked with the B.A.R columnist Dick Walters (a/k/a Sweet Lips).

In a 1997 column, he wrote: "Golly, Linda, it seems like only yesterday we were working together at Sally Stanford's Valhalla in Sausalito. I'm saving that story for my memoirs!" 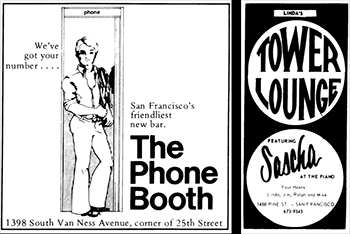 By 1964 Pancost was running the Tower Lounge and, from all available evidence, was quite comfortable running a gay bar. The bar was a member of the Tavern Guild and by 1967 was advertising in both Bar Rag and Vector.

In November 1968, The Tower Lounge was host to a campaign party for Perry, a candidate for the Imperial Court's Empress IV contest. There were benefits for patrons and by 1968 the bar added a pianist, Sashca.

However by 1970, Pancost was no longer the owner. The bar continued for a few years before becoming The Wild Goose, which was open until the 1980s.

In April 1974 Pancost took over the Phone Booth that had operated under that name on S. Van Ness since 1951. The bar was named for the proximity to the Telco Building at 3333 25th Street, a phone company building built in 1947, as well as for the small size of the bar.


For at least the first few years, Pancost actively advertised in the B.A.R. with the motto, "We've Got Your Number." The bar disappears from the record for about a decade, showing up again in 1984 in a B.A.R. Sweet Lips column commemorating the tenth anniversary of the bar.

In 1993 Pancost purchased a piano for the bar from a piano tuner and took his recommendation for a piano player. That's how Tim Lewis, interviewed for this article, became the first pianist to work there (for about two years). He had been playing at places like Buckley's and Charpe's around town and had built up a reputation.

Of the bar, Lewis said, "It was a working class bar with serious drinkers - they were nice people who got along well. It was a mixed clientele, but all of the bartenders were gay."

The mixed nature of the bar included Muni drivers, local business people and a few patrons who were "married, but not to each other." The bar made its own "cactus juice" (a type of schnapps) and had a neighborhood spirit.

Lewis recalled an evening when a transformer blew and the lights went out. Bartenders distributed candles to the tables and the patrons sang in the candlelight. Linda reigned over the bar, telling tall tales of the city in the days of Sally Stanford (among her tall tales: she told Lewis Sally had her hostesses from the city water ski into Sausalito).

Throughout the 1990s, the bar participated in AIDS fundraising efforts, with bartender and Emperor IX Bobby Pace hosting benefits for Continuum and the AIDS Emergency Fund.

The bar was also part of the Condoms Now distribution program of the Stop AIDS project - and all of this was narrated by frequent mentions in Sweet Lips columns.

This is normally where I would tell you what a shame it is that they bar is gone.

Surprise! It's still there! Linda sold the bar to her bartender Jared Wendt and his partner Steve Spingola early in the last decade, and they remain the owners to this day. They still have community events there hosting Absolute Empress XXXV, Suzie Wong's 'Turkey Pluck!' on an annual basis.


After a series of parties in 2003, Pancost retired to Auburn for a year. She moved on to that great cocktail lounge in the sky on Nov. 12, 2004. Her obituary in the B.A.R. said she, "considered all her customers family...she was always there to lend an ear when nobody else would."

I stopped by the bar a few weeks ago and found the bartender charming (She told me her name was "Anita...like Anita drink"). Framed autographed photos of Tom Selleck and Tom Jones are behind the bar.

Though the days of a piano and homemade cactus juice may be gone, there is a pool table and enough kitsch sensibility to entertain anyone. It was called a "Gray bar" (as in the gray area between gay and straight) by the Chronicle in 2006 and was listed as one of SF Weekly's "50 Top Dive Bars in San Francisco" in 2016.

It deserves to a visit (perhaps on the way to El Rio or Wild Side West). Have a drink in memory of Linda!