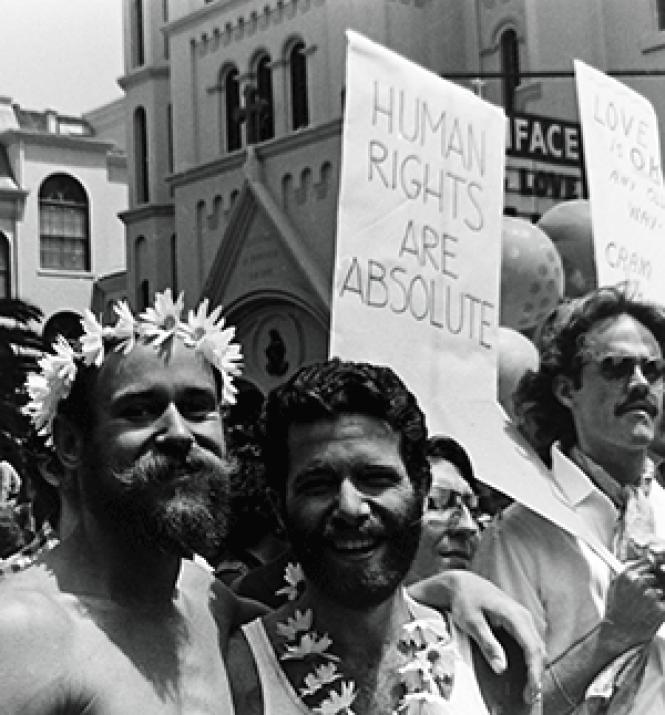 We looked down Market Street toward the Ferry Building. Dykes On Bikes led off the first downtown Gay Freedom Day parade from Spear Street up Market toward the Civic Center. Gay Frontiers: Past, Present, Future.

It was Sunday, June 26, 1977. The sun was out. The temperature held around sixty degrees. The crowd, estimated at close to a quarter million, was ready to celebrate. Was ready to demand their rights in a City that was creative, bohemian, and still affordable.

"You won't see anything like this most places," I said.

He had traveled, lived in London, Paris, and had settled in San Francisco. As Leatherneck bar staff, we had been invited to join the Ambush bar staff in their quickly rented rooms in the Tenderloin overlooking Market Street. The Ambush and Leatherneck were brother bars. A small leather shop run by the Ambush operated in the Leatherneck. Staff moved comfortably between the two establishments.

Hugo had a daisy chain around his neck. His boyfriend wore flowers in his hair. The spirit of Haight-Ashbury was still alive. Behind them I spotted a placard proclaiming "Human Rights Are Absolute."

A different hate was afoot in the country that year. In Dade County, Florida, singer Anita Bryant, whose 78-vinyl records included her hits "What Kind of Fool Am I," "Call Me Irresponsible" and "I Left My Heart in San Francisco" was hawking her anti-gay "Save Our Children" crusade.

To raise money for the Gay Dade County defense fund, I had held a used jockstrap auction at the Leatherneck. Armistead Maupin, dressed as Leather Bunny, auctioned off the jockstraps, including one from his friend and former San Francisco 49er Dave Kopay. The All-American running back had come out after he retired from the NFL.

California's own Brigg's Initiative on the upcoming November ballot sought to fire all gay and gay supportive teachers and public school employees. And then, just five days before the parade, in our great City by the Bay, 32-year-old Robert Hillsborough had been stabbed to death by "fag bashers."

A West Coast equivalent of PFLAG marched by. "We Are Your Children." "I Love My Gay Son." "I Love My Straight Mom." The signs left little doubt where the marchers' sentiments lay. Cheers went up from the crowd lining the street.

The cheering stopped. A lone drummer in black cape and bowler hat marched solemnly down the center of the street, banging his drum slowly. Behind him walked a line of men carrying five oversized placards. They included photos of Stalin and Hitler on the left. On the right were pictures of the Ku Klux Klan and Idi Amin, despot of Uganda. In the middle of the lineup was an oversized photo of the orange juice queen, Anita Bryant. The parade entry was titled "March of the Dictators."

"Want a toot?" Chuck Arnett, the Ambush's Lautrec of Folsom said. He nodded up to the bar's rented rooms filled with parade watchers. We did.

Four hours later, the parade ended at the Civic Center. Assemblyman Willie Brown requested a moment of silence for Hillsborough before announcing, "Anita Bryant! Eat your heart out!"