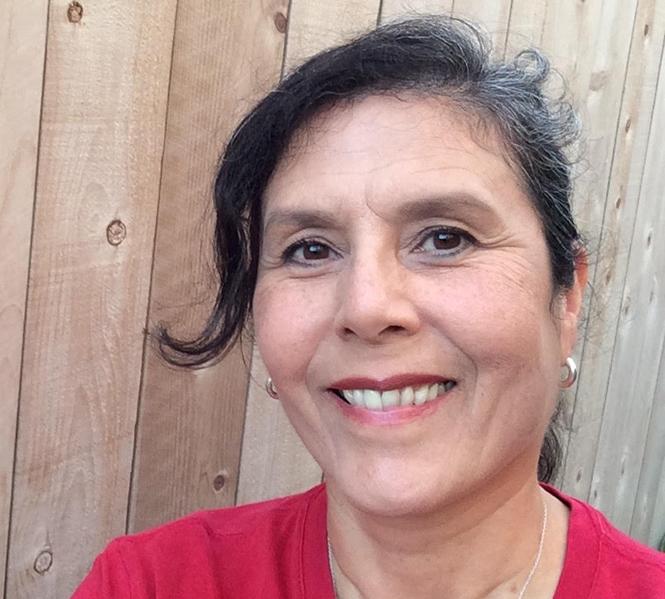 Lesbian comedian Monica Palacios: "This is bigger than me." Photo: Courtesy the artist

The newest show from San Francisco's most explosive comedian, Monica Palacios, is coming soon, and you shouldn't miss it. Her new show, "I'm Still Here," is coming to Manny's on Nov. 15 & 16. This is the most recent in a long list of shows spanning over 30 years, all written and performed by the Latinx lesbian comic. She now spends her time traveling from one residency to another across the US, teaching classes, and working on future performances.

A product of current events of the last several years, "I'm Still Here" brings the past into the spotlight. "It's subconsciously been in the works since that Jack o' Lantern of a president became president. Once that happened, I started yearning for the past because the present became so toxic," Palacios said. The show is autobiographical, focusing on Palacios' childhood growing up during the 1960s and 70s. Comedy abounds, but loyal fans should also expect to see her venture into new and more personal territory. "That's been a new thing for me and my audience," she said. "They'll see more drama, more emotion. Solid comedy, for sure, but definitely more of the vulnerable Monica Palacios."

Palacios got her start performing standup comedy at the Valencia Rose Cabaret in San Francisco in the early 1980s. The gay comedy club featured acts such as Whoopi Goldberg and Tom Ammiano. As a queer Latina woman, she didn't feel comfortable outing herself in the straight comedy clubs where she began performing in her early 20s. "It was too toxic to be out at the straight clubs. I was concerned about my safety," she said. But then she read an ad in the Bay Area Reporter for a gay comedy open mic night at the Valencia Rose Cabaret. It was only in this supportive, community environment that she felt comfortable being her true self. Her first set received a standing ovation and explosive applause. Within three months of beginning standup, she had been hired by the Rose to headline during their Saturday night comedy shows. For most people in the business, this sort of immediate success is unheard of. It usually takes years before one gets enough laughs and acclaim under their belt to get even a toe in the door. "That I got paid after just three months of doing standup was incredible and empowering."

Since her start, Palacios has made activism a priority throughout her professional career. Resistance plays a large part in her upcoming show. But Palacios said she hasn't always been this focused on activism. When she began doing standup, she didn't have these concerns. "I'm young, I'm not thinking about politics or nationality or sexuality, I just want to be funny," she said. But then queer and Latina audience members began approaching her, thanking her for being visible and for being herself on stage. That's when she had her epiphany. "This is bigger than me. This is about making people proud." From that point on, presenting the most authentic version of Monica Palacios to her audience became her own approach to activism. Her approach to standup hasn't changed much since she started, but the strategy behind it has. Onstage today, she talks about whatever she wants with the full knowledge that her freedom and choice to use her voice as a queer Chicana is her activism.

The upcoming show's setting during the 60s and 70s tries to offer the audience a respite from the events of the present. "I know I'm good at connecting with people from the stage," she said, and it makes sense. Even over the phone, Monica's presence is powerful. Her concern for her community and for the state of current events is infectious. After speaking with her, I felt a sense of urgency to band together within my community. If you're curious, you'll have to find out what that means for yourself. However much I pry, however, the most detail I can get about her upcoming show is this: "It's human experience. The more specific I get, the more universal my work."

Palacios has been doing this for a long time; she knows what she's doing. When asked about her vision for the show, she said, "I want them to walk away with hopefulness." After we hang up the phone, her hopefulness lingered with me. "You're not alone. We will rise and resist."