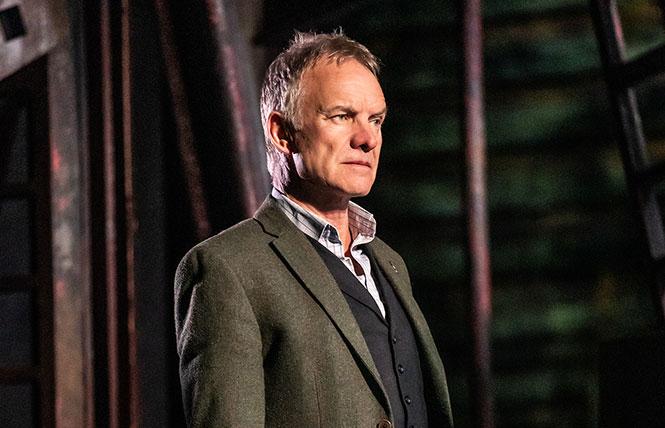 Way back in 1980, when 29-year-old Sting was still leading rock trio The Police, he wrote a rhythmically addictive, head-bobbing song with lyrics that convey the sort of social protest engaged in by young people more invested in sneering at the status quo than actually doing anything to effect change: "There is no political solution/To our troubled evolution/Have no faith in constitution/There is no bloody revolution," chants the man born Gordon Sumner before asserting, "There must be some other way," but offering no particular direction. The singer then floats away from Big Bad Capitalism with fervent repetitions of a self-soothing mantra: "We are spirits in the material world."

Over the subsequent decades, Sting has been more specific and action-oriented in expressing his social conscience, raising funds and awareness on behalf of ecological, human rights and anti-Brexit organizations. But "The Last Ship," the autobiographically inspired, collaboratively created musical that Sting stars in at the Golden Gate Theatre, ultimately founders in toothless protest fantasy.

The show's storylines, said to have been significantly trimmed since "The Last Ship" plied the rough waters of Broadway for less than a year in 2014-15, center around a small, working-class Northern England town. In 1986, Wallsend is economically dependent on the declining local shipbuilding industry. It's assumed that young men like Gideon Fletcher (Oliver Savile) will follow in the footsteps of their fathers and grandfathers, taking jobs and pride in the shipyard, building behemoth cargo vessels for the world's commerce.

But Gideon, seeking broader horizons, leaves both the town and his girlfriend Meg (Frances McNamee, whose gorgeous, beacon-clear soprano makes her the show's real star). The yard's industrialist owner, played with plummy plutocratic condescension by Sean Kearns, making hay of a small role, finds his business on the decline. Ships are now being built cheaper and faster elsewhere.

By the time Gideon returns 16 years (but just 15 minutes of stage time) later, the titular last ship is almost fully assembled, but its buyer has bailed. Most of the yardmen are to be laid off, the rest offered a few months' further employment at reduced pay, to dismantle their own skilled handiwork.

The relationship between Gideon, Meg and their now-teenage daughter (Gasp! He never knew!) is tough to take. After so many years away, by what sorcery does Gideon assume he'll be able to win back the secondary school sweetheart he abandoned? Why would Meg, after establishing herself as a successful single mother and independent business owner, succumb to his charms? Every little thing he does is magic?

Meanwhile, Sting plays Jackie White, the respected foreman who, after hashing things over with union representatives about whether to strike and hope for a government bailout or accept scrapping work and closure, is diagnosed with a terminal illness. Symptoms (including poor vocal projection) suggest it may be lung cancer, but the malady seems to go to Jackie's head, and he proposes a third way forward.

Rallying the troops before succumbing onstage, he exhorts them to complete the ship ("It's what we do!"), climb aboard and sail it out to sea. And they do, with Jackie's casket their solemn cargo. This is piracy and lunacy. A show that reaches for gritty realism ridiculously shifts course into Deus ex fantasia for one of the most dramatically unsatisfying musical finales in memory. There's no sense to the symbolism. Feeling that there's no political solution or bloody revolution, the goodspirited townsfolk opt to drift away from the material world, singing to themselves about their own hardy souls as they float toward willful oblivion. As another Police tune once put it, "Da doo doo doo/Da dah dah dah."

The new songs Sting has written for this show, like much of his oeuvre, are attractive, sometimes even stirring. They're richly orchestrated, with dense layers of instrumentation, by Rob Mathes. But they don't work to advance plot-points, they embroider upon them, slowing down the narrative. Frequently sung by large phalanxes arranged on the stage in inert tableaux, they feel not so much like the score to a musical as an album of "music inspired by" the story.

The set, projection and lighting design by 59 Productions and Matt Daw are handsome and impressively versatile. They'd add terrific depth and drama to a rock concert.