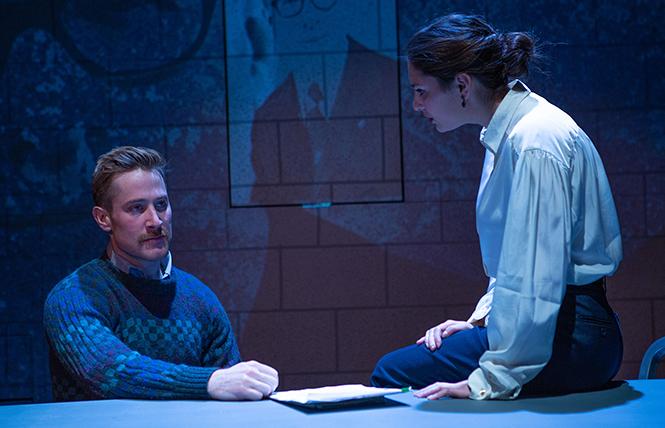 The San Francisco Playhouse's Sandbox Series new-play development program is an asset to the local theater scene. It presents world premieres of new work in productions described as having limited budgets and design elements that are, in fact, often quite polished. This season's first show, "The Daughters" by Patricia Cotter, gave vibrant voice to local lesbian history on a handsome set worthy of a mainstage.

The series' current offering, "Born in East Berlin" boasts some even more impressive and expensive-looking technical work. The rights to vintage performance clips of Springsteen and Bowie can't come cheap, and projection designer Teddy Hulsker seamlessly weaves them in and out of static mural-scale images, jolting the theater to life with bursts of feel-good nostalgia. Alas, the script by Rogelio Martinez is as rough as the tech is slick.

The overstuffed plot takes place in 1988, when Bruce Springsteen's historic concert on the Communist side of the Berlin Wall served as a harbinger of the following year's epochal change. Three romantic couples, at least one too many, are impacted by government surveillance and anti-Western propaganda during the planning and production of Bruce's Eastern Bloc party.

American rock promoter Anne (Ash Malloy) wears a pink-streaked, profile-obscuring Kate Bush fright-wig as she falls (who knows why?) for Hans (Patrick Andrew Jones), one of the bureaucrats assigned to tangle her plans in red tape. Hugbert, a hotel worker (Christopher Reber, whose ironic, world-weary delivery gives the play a few much-appreciated moments of humor), gets involved with Alix (Wera von Wulfen), a never-clarified mystery woman. Katja (Isabel Langen) and Gerhard (Griffin O'Connor) are German youths both frightened and entranced by the rock-n-roll freedom offered by the West. What exactly that freedom might be is unexplored. It's a blue-jeans-and-bandana trope, and Springsteen's presence throughout the play is lazy dramatic shorthand.

Martinez's characters are frustratingly untextured, pawns in a largely unexplained late-Cold War chess game that the playwright assumes his audience is already quite familiar with. So much for new work that brings younger folks into the theater. Given the more reasonably taken-for-granted familiarity of theatergoers with late-20th-century pop cultural landmarks, it's a waste of time to offer detailed exegeses of the lyrics to "Rosalita" or the emotional rush of "Dancing in the Dark." All it takes is a single chiming guitar chord from either of those songs to summon up feelings that Martinez struggles to bring out in flat dialogue.

Wanly directed by Margarett Perry, "Born in East Berlin" leans hard on stories it presumes audience members have all heard before and songs it knows damn well they have. It's like a boilerplate jukebox musical with no singing or dancing to distract from its emptiness.