Under the sea, over the proscenium 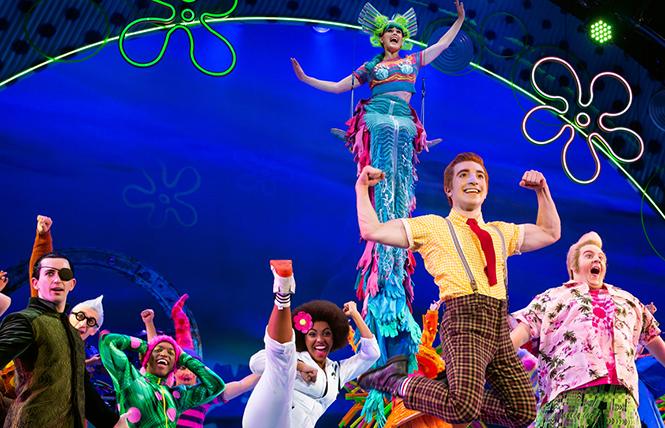 Scene from the touring version of "The SpongeBob Musical" at the Golden Gate Theatre in SF. Photo: Jeremy Daniel, courtesy Broadway SF

"The SpongeBob Musical" briefly graced the Golden Gate Theatre last week, touring after its hit Broadway run, then just as quickly swam away. Bubbles trailed in its wake.

Out There never really followed the "SpongeBob SquarePants" TV series, because neither OT nor Pepi watches television, and we're allergic to children who do. But one day, channel surfing in a hotel room, we happened upon series creator Stephen Hillenburg's animated world, and we were hooked like snapper. The quirky universe of Bikini Bottom spoke to us. Its colorful cast of characters — pocket Adonis SpongeBob, lovable oaf Patrick Star (a starfish), effete intellectual Squidward Q. Tentacles, glamorous smarty squirrel Sandy Cheeks — were not unlike people in our own world. We're glad to say the musical brought them all to vivid life for us.

Ladies and gentlefish, natural disaster threatens Bikini Bottom. The aqueous populace is about to be decimated by a volcanic eruption, and the bloviating Mayor and the government can't save them. The town's businesses care only about making money off the crisis. It falls to SpongeBob and his pals to save the day.

The cast inhabits the cartoon perfectly well in director Tina Landau's conception. Lorenzo Pugliese is a sunny-side-up, foursquare SpongeBob. Beau Bradshaw is hilarious as Patrick, deified by a cult of gullible Sardine Corps. Cody Cooley is a certified cephalopod in his big number "I'm Not a Loser," backed by a chorus line of sea anemones. With his meaty claws, Zach Kononov has a lock on hypercapitalist restaurateur Eugene Krabs, proprietor of the Krusty Krab, and Tristan McIntyre is delightfully villainous as Sheldon Plankton, owner of the failing Chum Bucket. Only in the cosmos of SpongeBob would the bad guy turn out to be a one-celled organism, but a really mean one.

As usual, the citizens are their own worst enemy. Although Sandy is working on a scientific solution to their apocalypse, they turn on her: "Land mammals go home!" "She has lungs, and this is a gill town!" If they could build a meaningless wall like the orange Imbecilic One wants to, they would.

This is all set to a perky score composed by an address book full of pop musicians. "(Just a) Simple Sponge," for example, was penned by Panic! At the Disco, and "No Control" is credited to no less than David Bowie & Brian Eno. Other showstoppers were written by the Flaming Lips, Sara Bareilles, Aerosmith, Lady Antebellum, John Legend and They Might Be Giants. It's a pop pastiche of Broadway-style novelty numbers. No crustacean could ask for more.

At Broadway SF's opening night, not a drop of the SpongeBob gestalt was lost on the adoring audience. The adults were having as much fun as the children, even while the children were, as usual, better behaved. It's often the case: the simplest among us do the most to save the day.