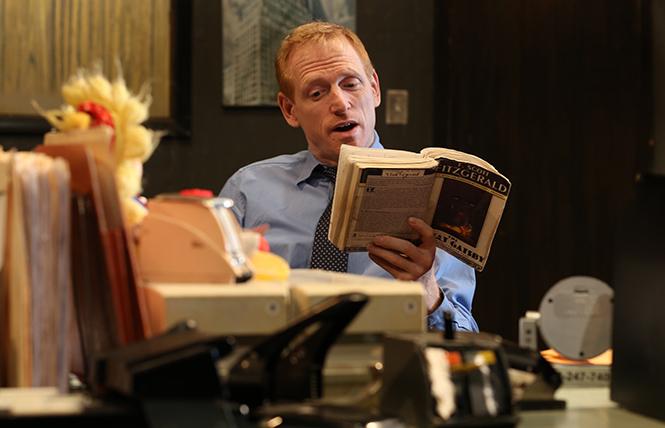 Nick Carraway, narrator of F. Scott Fitzgerald's "The Great Gatsby" and proxy for readers of the great Jazz Age novel, is prone to musing. During his first visit to Gatsby's Long Island manor, Nick slips away from his host, gazing and trying to make sense of his surroundings. "I began to walk about the room," he recalls, "examining various indefinite objects in the half darkness."

While I wasn't allowed to walk about during the 390-plus minutes I sat watching the audacious "Gatz" during its opening performance at Berkeley Rep last Thursday (the show runs from 2-10:30 p.m., including two 15-minute intermissions and a dinner break), I could relate to Nick's sense of eerie indefiniteness, his perception of shadowy veils concealing mysterious meanings. Created and performed by Elevator Repair Service, an experimental New York production company, this unabridged presentation of Fitzgerald's tale of American class-consciousness, romance and moral rot has traveled the world for more than three decades. And indeed, it's a trip. Less an adaptation than a complication.

The fine-tuned cast of 13 tells the story of Gatsby to audience members, often reading directly from the pages of a passed-around paperback, but also provokes them to muse on the mysteries of reading, endurance and the passage of time. Sitting in a darkened theater or sinking into a novel for hours on end, the mind rolls and wanders, sometimes in an enchanted fugue state, sometimes restlessly. One's own thoughts float up between the lines, collaborating and conflicting with the work at hand to generate a highly personalized hybrid version.

Metamorphosis begins as Nick (Scott Shepherd), one of the office drones, finds his machine won't boot up. Killing time while the IT guy dithers, he picks up a copy of "The Great Gatsby" and begins to read. Whether he's actually reading aloud or we're privy to his interior mindscape is left intentionally ambiguous, but gradually his voice grows crisper and more confident, as if he's channeling Carraway's narration rather than reading it. This man of little character is absorbing one of Fitzgerald's.

At first, Nick's officemates go about their workplace routines as if oblivious to his voice. Then Jordan (Susie Sokol) sits beside him, an audience for the storyteller. Soon she's reading the dialogue spoken by the Jordan Baker character in "Gatsby," and gradually she's not just reading, but playacting. Or becoming. Similar transitions occur in the rest of the cast as director John Collins toys with porous identities, evoking the workers' existential yearning for escape and readers' depth of engagement with compelling fiction.

As the ensemble becomes more and more engrossed in its Gatsby characters (Sokol, all devil-may-care wryness as Jordan, and Jim Fletcher, wringing unexpected humor from the title role, are standouts), Ben Williams' sound design also tilts toward the novel's milieu. The background sounds one might hear in a late-century mid-city office slip away, largely replaced by the sonic atmosphere summoned by Fitzgerald's prose, from the chime of ice against crystal glasses to the chirp of crickets at dusk.

From the moment Nick begins to read "Gatsby," the clock on his cluttered desk reads 9:40. Throughout the show he glances at it, perplexed, but accepting the warp in time that occurs when one enters a work of fiction. During their hours of reading, Nick and his co-workers come and go, flipping off the overhead fluorescents in the office, shutting the door as they leave the stage, as if closing for the evening, then stepping back in, flipping on the light switch and returning to what feels like yet another day of humdrum routines. Simultaneously, the novel's plot progresses over several summer months, occasionally diving years into the past with flashbacks. The set looks like the 1980s, the book is set in the Roaring 20s, and in the 21st century, the streets of Berkeley, sunlit when the show began, have fallen dark by the evening dinner break.

"Gatz" collapses chronology, intermingles identities, and nudges one's mind toward the metaphysical. Beyond sharing Fitzgerald's felicitous prose, it muses on reading and theatergoing. It's an elaborate meditation on audience participation.