Would-be king of the wild frontier 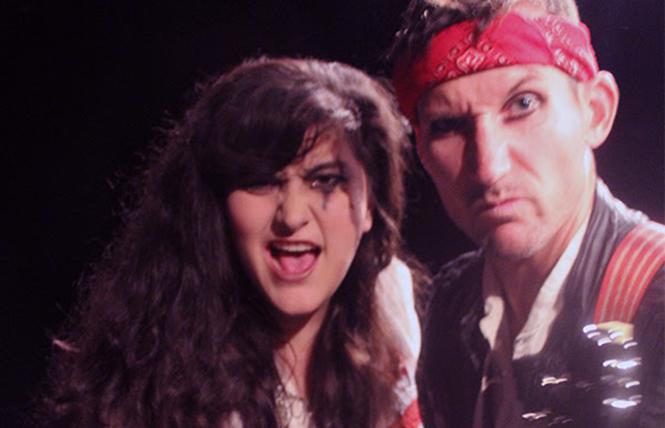 I hear America singing. A sample lyric: "James Monroe was a douchebag."

Oh wait. Is that America? Or is it a petty, potty-mouthed POTUS who feels that he speaks for us all, and does so perfectly?

So it goes at "Bloody Bloody Andrew Jackson," a rock musical originally produced in the year of Obama's first election and now onstage at the Custom Made Theatre Co., through Oct. 27. It's hard to miss the topical relevance that surely made this ragtag show about a racist, egomaniacal, genocidal U.S. president smell like catnip to director Brian Katz, who is also the company's artistic director. While writer Alex Timbers and lyricist Michael Friedman created their piece in the time of the Tea Party, no blue-blooded San Franciscan will miss the fact that populist rabble-rouser Jackson, whose most loathsome legacy is the institutionalized slaughter of Native Americans, and whose fan/electoral base uncritically adored him, is in many ways a proto-Trump.

"Bloody Bloody" is in obvious ways a proto-"Hamilton," and will likely be regarded in the annals of Broadway as such, a quirky footnote to our era's Commander-in-Chief of historical musicals. That's not an entirely fair assessment, because "BBAJ" should probably never have been presented on Broadway. (It ran for only about three months.) It's more a bundle of sharp single-frame political cartoons than a sweeping proscenium epic. Custom Made's limited budget and intimate setting make an entirely appropriate showcase for its charms. Go, but with the right expectations: "BBAJ" is one yappy mutt compared to the Westminster pageant of "Hamilton."

Rather than a flowing narrative, "BBAJ" offers a silly narrator (Teri Whipple) who pops onstage intermittently to deliver a discreet highlight of the Jackson timeline, not so much a storyteller as an incidental Pez dispenser, an impression abetted when she gets shot in the neck. The bulk of the intermissionless 85-minute performance consists of often-funny vignettes built around Friedman's emo-pastiche songs, in which the influences of Green Day and Dashboard Confessional are as clear as those of "Schoolhouse Rock" in the show's overall concept.

Accompanied by a propulsive three-piece trio led by drummer-keyboardist Armando Fox, the 11-member ensemble thrashes and pogos through the superficially catchy score (earworm riffs, evaporating melodies) and witty lyrics with enough bite and brio to compensate for their modest singing skills. Even James Grady, who plays Jackson, is more about rock-star charisma than front-man vocal chops. Leslie Waggoner's choreographic demonstration of groupthink is reminiscent of her recent work in Ray of Light's "American Psycho," but it feels more organic and energized here, thanks to a smaller stage and a welcome infusion of humor.

The brainy anachronism of that humor will likely delight some audience members, while striking others as "Revenge of the Nerds"-style overindulgence. There's one number called "Illness as Metaphor" that finds the song in Sontag, and another lyric that posits, "I'm sure Michel Foucault would have an opinion, but he isn't born yet." A less ostentatious reference is made in the show's uncharacteristically mellow and beautiful penultimate song, "Second Nature," which owes a major debt to Joni Mitchell's "Big Yellow Taxi."

Smeared with goth make-up and dudded up in costume designer Rachael Helman's frontier-thrift glad rags, "Bloody Bloody Andrew Jackson" is hardly a great American musical, but it's timely, lively, and much more fun to watch than the current presidency it reflects. Let's hope the one's revival anticipates the other's demise.