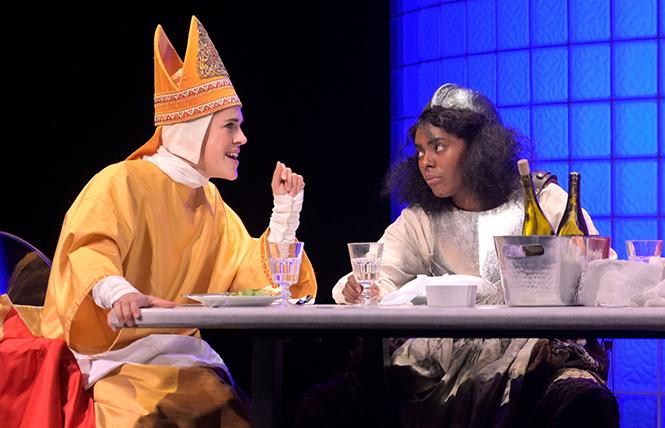 Even if you've never seen "Top Girls," you've likely heard something about British playwright Caryl Churchill's celebrated 1982 work. That would be that the play, now running at A.C.T. through Oct. 13, features a fantastical soiree attended by groundbreaking women from many eras, both historical figures and fictional characters; a sort of theatrical sister to Judy Chicago's gallery installation "The Dinner Party," first exhibited a year before "Top Girls" debuted. What may surprise you is that Churchill's dinner party makes up just the first scene of "Top Girls," and that, at least in this new production, the post-prandial drama proves far more engaging, entertaining and provocative.

So, the celebrated bit: The Pope, a geisha, a brutish soldier, a starchy Victorian, and a Chaucer maiden walk into a bar (well, a fancy private dining room). This magic-realist guest list is assembling circa 1980 to celebrate Marlene (Michelle Beck), a hungry Londoner in her mid-30s, who has just been promoted to a Managing Director position at the Top Girls employment agency. Over the course of a boozy, boastful evening, Marlene is regaled with tales of both glory and warning from these five impressive women. (The Pope is Joan, who, according to legend, hid her gender and held a Mamacita Papacy from 854 through a scandalous defrocking in 856.) Until they come together in a pained roar of unity at scene's end, the historical heroines tend to self-absorption, sharing their stories of personal strength amidst male oppression — sexual abuse, forced servitude, sacrificed children — in rambunctious, frequently overlapping monologues. It's as if the opportunity to speak openly, with no men present to interrupt and domineer, feels like an only chance for each of them. They're compelled to grab the spotlight and get their accomplished lives down for the record. Centuries of circumstance have made it difficult for them to pause and be kind to each other.

It's a bold, flashy prologue, made all the more so by Sarita Fellows' luscious, color-coordinated costumes: the papal vestments, layered kimono and Marlene's billowy "Working Girl" jumpsuit throw flares of heat, while dark tweeds and tarnished armor simultaneously telegraph strength and sadness. Even amidst the scene's swirl of competing egos, Rosie Hallett's garrulous Groucho of a Pope and Summer Brown's largely silent Harpo warrior are standout comic turns.

While this renowned scene's "tale as old as time" concept is quickly and clearly understood, its stage time stretches uncomfortably long. Back when "Top Girls" premiered, it no doubt ticked the box for "fashionably avant-garde." Today, it feels like an undeniably clever curtain-raiser stretched to act-long proportions.

But wow, when that curtain finally gets raised, "Top Girls" zooms beyond intellectual cleverness and delivers a thrilling volley of tragicomic gut-punches under the savvy direction of Tamilla Woodard. Marlene is our throughline as the show now toggles between her Top Girls office — the actresses who played our Act I heroines are now headhunters, secretaries and interviewees, nearly unrecognizable from role to role — and the dilapidated working-class town where she grew up.

At Top Girls, where the only male employee has called in sick, having apparently plunged into depression upon learning that Marlene's won the promotion he'd assumed would be his own, we observe the sharp-edged camaraderie of female office-workers in Margaret Thatcher's 80s London. It's an era when feminism is still considered an F-word to many. Marlene, her co-workers and the women they interview have long been told that having children and having a career are diametrically opposed goals. Given this circumstance, an employment agency where working women assess job-seeking women becomes an embattled petri dish of solidarity and judgmentalism.

The interviews are acid-etched mini black comedies. We see the "is that all there is" discomfort of a 30ish headhunter facing a weary businesswoman in her late 50s (Julia McNeal, hard crust over heartbreak) who has sacrificed everything for her job, only to be passed over for promotions to a series of overconfident young men. We meet an ambitious 21-year-old (Lily D. Harris) whose aspirational notion of a sales job requires little more than traveling and flirting. And we listen as Marlene cuttingly critiques a chipper recent graduate (Monica Lin, Act I's geisha), disdainfully assessing her wardrobe and telling her to avoid mentioning her desire to get married. Virtually anything any of these women say to each other runs the risk of being perceived as an insult; society has set them on a permanent psychological tightrope walk.

When Nina Ball's period-perfect scenery shifts from the glossy surfaces and glass brick of the big city to the threadbare yet cluttered small house in the town where Marlene grew up, we encounter another set of women: her older sister Joyce (Nafeesa Monroe), in dire financial straits and split from her husband, and teenage daughter Angie (Gabriella Momah), dimwitted, lacking social skills, and in thrall to her cosmopolitan auntie. Barely making it from day to day, they are types unseen in the upwardly mobile tunnel-vision of Marlene and her London cohort. Long-seething sibling conflicts come to the fore as the sisters argue over their nursing-home-bound mother, familial obligation and the changing perceptions of women in British society. Beck and Monroe sink their teeth into the sisters' interactions; Marlene overeager to smooth over past injuries, Joyce relentlessly flinty in her dismissiveness, covering pain with disdain.

As Angie, Momah brings a compelling physical and vocal concreteness to her portrayal of an unquestionably innocent, mentally disabled adolescent. It's a pivotal role that fuels playwright Churchill's ultimate plot twist, and in retrospect, provides a bit more context for her opening fantasia. The ladies of the 80s may have had serious disagreements among themselves, but in the end "Top Girls" isn't a period piece about a single decade. It's about pernicious, persistent societal priorities. It calls bullshit on epochs of lip-service to "Women and Children First."