Too much & not enough: 'The Great Wave' 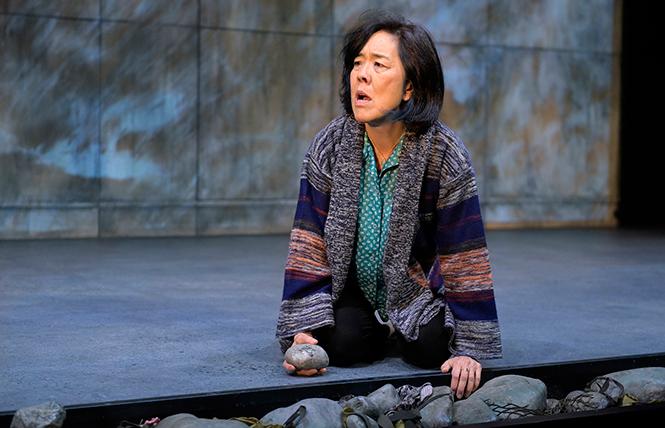 "We're not so different, you and me," says gumshoe Takeshi, trying to ingratiate himself with Tetsuo, an alienated teenager he suspects knows more than he's admitting. See, there's a girl gone missing. And both she and her sister had a thing for this kid.

We're in a shadowy gray concrete interrogation room. Tetsuo (Julian Cihi) sits at a small table. Takeshi (David Shih) stands across from him, looming tough in a black leather jacket. A single lamp throws a cone of harsh light. Not at Tetsuo, though. The light falls onto the empty tabletop, illuminating nothing; it's as misdirected as the whole gimcrack SVU procedural that dominates the first act of Northern Irish playwright Francis Turnly's "The Great Wave," now in its American premiere at the Berkeley Rep, directed by Mark Wing-Davey.

In the late 1970s, the North Korean government abducted Japanese citizens, using some of them to teach language and culture to Korean spies who would later go undercover in Japan. This stunning bit of history — let alone the broader scope of Korea and Japan's complex and tempestuous relationship — may be unknown to many American audience members, so presenting it in the form (and formulaic dialogue) of a detective story might well be an attempt to provide an accessible framework.

But Takeshi discovers absolutely nothing during his investigation, and he's unceremoniously dropped about an hour into the play's three-hour sprawl. The entire detective story is one giant red herring. What a waste of an audience's attention.

After this whole lot of leisurely next-to-nothing, things get hectic. It turns out that 17-year-old Hanako (Jo Mei) is in fact being brainwashed in a North Korean spy school. First her captors relentlessly drum Hanako with propaganda, intent on transforming her into a Korean-speaking Kim Jong-il-worshipping fembot. Flash-forward! Years later, believing they've succeeded, the spies insist that Hanako now teach one of their own to convincingly speak and act Japanese. Your "Wait, what?!" is merited; this pedagogy seems like a surefire recipe for backsliding. Flash-forward! More years later, the well-taught spy lady and Hanako embrace in twisted sisterhood just before one is sent sneaking into Japan and the other is forced into marriage with a Korean ex-convict.

Back in small-town Japan, over the course of 16 years, Tetsuo (still Julian Cihi, convincingly devoted) and Hanako's sister Reiko (Yurié Collins) and mother Etsuko (Sharon Omi) have each delivered a soliloquy about how this whole mess is their fault (honorable self-flagellation, check!). But ultimately they have banded together, guessing Hanako's true fate and repeatedly petitioning a government functionary to do something about it.

There's lots of expensive technical work on hand here, including Tara Knight's handsome but sometimes inexplicable video design. Why do we need footage of a kid emerging from the sea immediately before, on stage, we see a kid emerging from the sea? Why does an image of an airplane remain unchanged as characters stare and point, narrating its disembarkation? But it's all in service of a script that's both too slow and too rushed, that gives its audience too much and too little. "The Great Wave" is no detective story, but this production is a huge mystery.