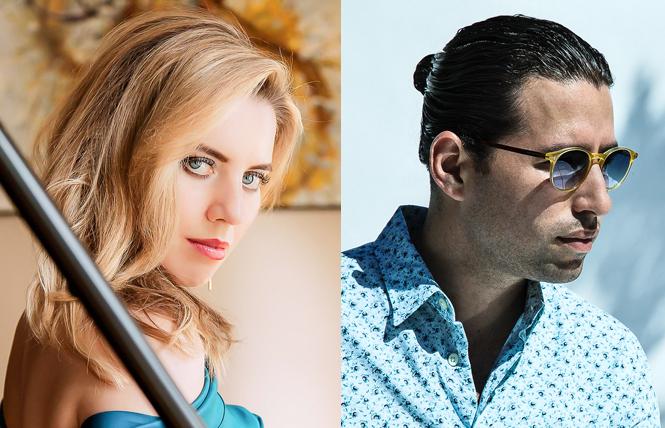 In this, our second week of the Fall Arts Preview, we offer surveys of what's coming up in Bay Area Theatre, Art Galleries, the San Francisco Opera, Film, and lesbian-created Pop Music this fall. To top it all off, here are a few more highlights to watch out for in the coming Arts season.

San Francisco Performances open their 40th Anniversary Season with appearances by Russian-born classical pianist Natasha Paremski and Cuban Jazz pianist and composer Alfredo Rodriguez on Fri., Sept. 27, 7:30 p.m. at Herbst Theatre. SFP President Melanie Smith explains, "We're excited to present this unique pairing of musicians in their first performance together. Based on Natasha and Alfredo's similar background and interests, I invited them to perform together in a unique call-and-response type program that incorporates improvisation and interplay. Natasha will play works by Prokofiev and Ravel, as well as possibly one of the most challenging works in the piano repertoire, 'Islamey' by Balakirev. Alfredo will follow with his own intensely virtuosic improvisations, in response to Natasha's program. Definitely expect some fireworks in this program!" Tickets ($70, $55, $45) can be purchased at sfperformances.org or by calling (415) 392-2545.

"An essential San Francisco story, 'The Daughters' follows the 60-year journey of a community from the initial secret meeting of the first lesbian social club in San Francisco to closing night of the last lesbian bar. As women loving women gather in defiance of convention (and the law), they drink, debate, politicize, flirt, drink more, dance hard, make out, fall in love, break up, make history, and change the way the world thinks about the multi-dimensionality of female sexuality. 'The Daughters' is a play about the transformation of identity, gender, and sexuality across generations in the queer epicenter of the universe."

Feinstein's at the Nikko has announced their lineup of upcoming artists for the fall. Performers include stars of Broadway and the West End Frances Ruffelle and Caissie Levy, Broadway and television star Andy Mientus, and spirited celebrations of immortal performers Billie Holiday, Marvin Gaye, and Aretha Franklin.

Tony Award winner Frances Ruffelle, known for her iconic portrayal of Eponine in the original cast of "Les Misérables" in London and on Broadway, brings "Frances Ruffelle Live(s) in New York... in San Francisco!" to Feinstein's Sept. 27 & 28.

Broadway and television star Andy Mientus (CW's "The Flash," NBC's "Smash," "Spring Awakening," "Les Misérables") will bring Joni Mitchell's iconic 1970 album "Ladies of the Canyon" to life onstage at Feinstein's at the Nikko. You know Out There will be there among the Joni-heads. Oct. 12 & 13.

Currently starring on Broadway as Elsa in the smash-hit musical "Frozen," Caissie Levy will share songs and stories from throughout her celebrated career, including highlights from "Wicked," "Ghost," "Hair," "Les Misérables," and "Rent." Oct. 25 & 26.

Top Shelf Classics! returns to Feinstein's at the Nikko with the debut of "What's Going On — The Songs of Marvin Gaye and Aretha Franklin." Nov. 3. Tickets for all shows are on sale now by visiting www.feinsteinssf.com or calling (866) 663-1063.

Sometimes press releases need no explanatory gloss. "An interstellar strip show is in the works. Armand Peri, entrepreneur and founder of Hunk-O-Mania, a nationwide chain of male strip revues [for women], is making history by sending one of his dancers, Rudy Bundini, to space," writes PR Newswire. "At $250,000 per seat, Virgin Galactic is planning a commercial ride into space in 2020. Peri says he has secured a seat for Bundini on next year's rocket. More than 600 passengers from 60 different countries have put down a deposit to ride to space."

"This is history in the making," said Peri. "Astronauts come in all shapes and sizes of G-strings. I'm constantly trying to find ways to show that my dancers are just like everyone else. They're dads, entrepreneurs — and soon-to-be astronauts."

"Bundini, a Hunk-O-Mania dancer and professional model, is putting together a routine he is planning to unveil in space. The 32-year-old has been implementing an intense training regimen to ensure his signature moves survive Zero gravity. Some of his iconic moves include the 'Striptease, please,' and the 'Hold-n-hump.'"

Yes, how does the "Hold-n-hump" work up its signature rhythmic thump and bump in Zero gravity? Ah, the mysteries of astrophysics. If this space capsule's a-rockin', don't come a-knockin'.