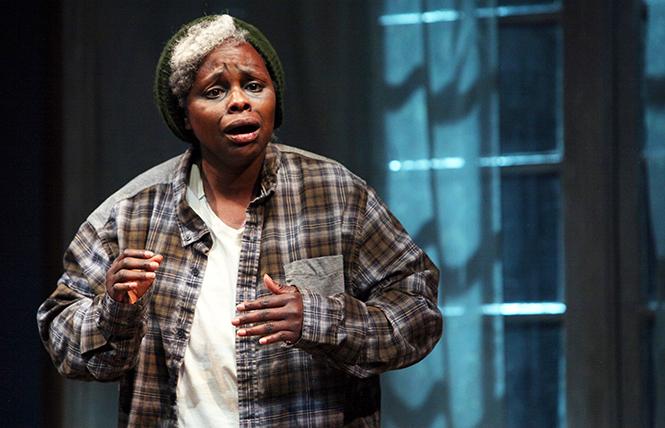 Nancy Moricette as Abasiama in "In Old Age" at the Magic Theatre. Photo: Jennifer Reiley

Indeed, the piquant relationship and tart-tongued dialogue between its two cantankerous septuagenarian characters is the most appealing aspect of "In Old Age," Mfoniso Udofia's latest installment of her "Ufot Cycle" of nine plays following the lives of an extended Nigerian-American family, now playing the Magic Theater.

Udofia has said that while the plays have linkages, each should be able to stand on its own. Considering only the excellent recent A.C.T. production of "Her Portmanteau" and this Magic world premiere as evidence, I'd agree, but with a caveat: Each play can also stumble on its own. That's unfortunately the case with "In Old Age," a muzzily structured psychological haunted-house tale that's all mood and little narrative energy or logic.

"In Old Age" finds Abasiama (Nancy Moricette), the Ufot family matriarch, living in the drafty, battered Wooster, Massachusetts house she shared with her late second husband. Her grown children rarely visit, but they have pooled funds to hire Azell, recommended as trustworthy by a local church, to refinish their mother's hardwood floors and make any other necessary repairs to the house.

Unbeknownst to either her children or to her gentleman caller at first, Abasiama is far more damaged than her home. The audience is made privy to the sounds in her head, oppressive creaks and booming thumps that seem to emanate from the house itself, as if the walls have absorbed and are now regurgitating the worst of her marriage and memories. Azell arrives each morning to wrangle with this cantankerous woman. Their superficially oppositional repartee reveals glimmers of commiseration and a common loneliness. Their covert flirtation is a crotchety, hunchbacked ballet.

Jones turns in a terrific performance. His face is a bubbling mudpot of emotion. We can see Azell straining to be a good Christian gentleman even as Abasiama's unreasonable demands repeatedly bring his patience to a boiling point. When Azell recalls his own failings, including physically abusing his wife, Jones shows us a two-tiered fury: the drunken rage of his past overlaid with a newfound anger at himself.

Moricette's Abasiama is less nuanced. She swings from an almost-comatose recessiveness to howling fury. The audience needs more middle ground if she's to win empathy for her character rather than pity.

The set design by Andrew Boyce is handsome and poetic. Abasiama's living room, with its huge windowed porch, flows almost seamlessly into a front yard full of leafless trees, the visual blend of interior and exterior echoing the porous boundary between the old woman's inner turmoil and her physical living space. In one scene, Azell stands in the yard during a violent rainstorm watching through the windows as Abasiama rages through the house. Sara Huddleston's thunderous sound design and the eerie shifts and blinks of York Kennedy's lighting do a marvelous job enhancing the threatening ambience.

"In Old Age" is directed by Victor Malana Maog, who also helmed the beautifully detailed "Her Portmanteau." He struggles here with Udofia's far less developed characterizations and a scenario that's both vague and repetitive.

The show ends with a headscratcher: Abasiama and Azell snuggle like lovebirds while telepathically reading each other's memories. Until that point, having adored Udofia's work in "Her Portmanteau," I'd kept struggling to make sense of this play. But this was one too many sour notes. It was time to give up the ghost.