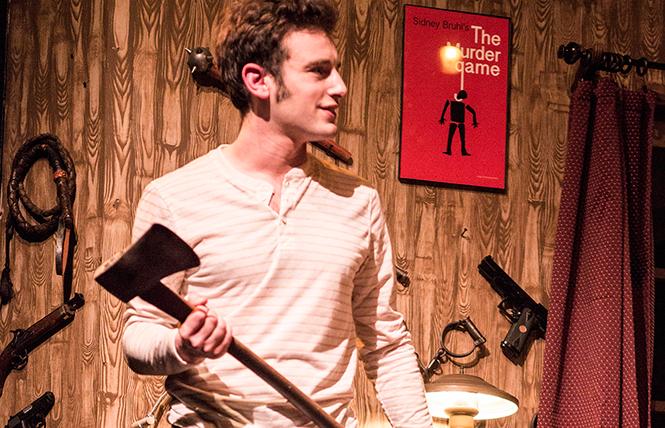 Ira Levin's twisty self-referential thriller "Deathtrap," now in a Theatre Rhinoceros production at the Gateway Theatre, is one of the most commercially successful plays of all time. Set in a single room, the meta-mystery follows playwright Sidney Bruhl and his competitive young protégé Clifford Anderson through a series of violent murders — some faked, some real — as they battle over authorship of a show that bears a strong resemblance to the one you're watching. "Deathtrap" debuted on Broadway in 1978 and was still running when a feature film adaptation opened four years later.

While the movie version was relatively unsuccessful, it forever affected the collective cultural memory of "Deathtrap." To many viewers at the time, a brief smooch between Bruhl (Michael Caine) and his protégé Anderson (Christopher Reeve, strapping and shirtless) was the most horrific twist in a thriller full of them. Reeve later referred to the scene as "the $10 million kiss," suggesting that's how much potential box office revenue was lost because of it. (There was actually no kiss in Levin's script or in the Broadway staging. Ironically, it's been added to most theater productions subsequent to the movie.)

Given that Theatre Rhinoceros bills itself as "the longest-running queer theatre in the world," audiences at its new production certainly won't be scandalized when Sidney (John Fisher) locks lips with Cliff (Jake Soss). What they may be surprised by is just how irrelevant that kiss is in the overall scheme of things.

Based on script alone, "Deathtrap" really doesn't merit much consideration as queer theater. It's an airtight, plot-driven gizmo, a puzzle as much as a play. Its sex appeal is on par with the Sunday crossword. Any character's gender, sexuality or race could be switched to no significant detriment. In Rhino's rendition, Sidney's wife Myra is played by Desirée Rogers, an African-American actress. While she'd be unlikely to go unremarked upon in the 1970s Connecticut wasp nest where the story takes place, Myra, like every role in "Deathtrap," hasn't been written to resonate as an actual human being; she's just one of the pieces in Levin's clever game.

While leaving the script to its amusing, automated machinations, Fisher, who also co-directs the show with Jerry Metzker, nonetheless has a fine time embroidering on the work's "gay play" reputation. His Sidney is a closeted fussbudget circa 1978. Pulling disdainful faces, adjusting his ascot (!), using homophobic quips as armor, and flapping his cardigan-sleeved arms, Fisher evokes John Waters butching it up.

As Cliff, Soss initially struck me as overemphatically stagy. So I was relieved — not to mention impressed and delighted — to see his style shift after the plot's first twist revealed that the mediocre performance belonged to the character, not the actor.

Rogers, as Myra, and Randy Soloman, as his lawyer, do yeoman's work in roles that serve primarily as narrative devices. But the third supporting cast member, Anne Hallinan, brings a blithe spirit to Helga Ten Dorp, the psychic next door; her Dutch-accented medium is a dizzy delight, filling the room with infectious comic energy every time she enters.

While Levin's script is chock full of quaintly dated showbiz references that will sail over many younger viewers' heads (The Amazing Kreskin, Merv Griffin, "The Magic Show"), the set he describes in his stage directions, which Gilbert Johnson has impressively executed, is one giant, timeless theater joke. Sidney's wood-paneled drawing room, festooned with an armory's worth of weapons, is Levin's knowing wink at Chekhov's famed playwriting advice: "If in the first act you have hung a pistol on the wall, then in the following one it should be fired. Or it shouldn't be there in the first place."

Meeting that standard would make the second half of "Deathtrap" a total bloodbath. But Chekhov's guidance was offered in regard to the creation of lasting works of dramatic art, not a diverting onstage parlor game like "Deathtrap." Well-aware of his own short-shelf-life jokes and fun-but-flimsy gimmickry, the late Levin might be surprised to learn that, despite its long-ago onscreen kiss of death, his comic thriller is still alive and tickling.