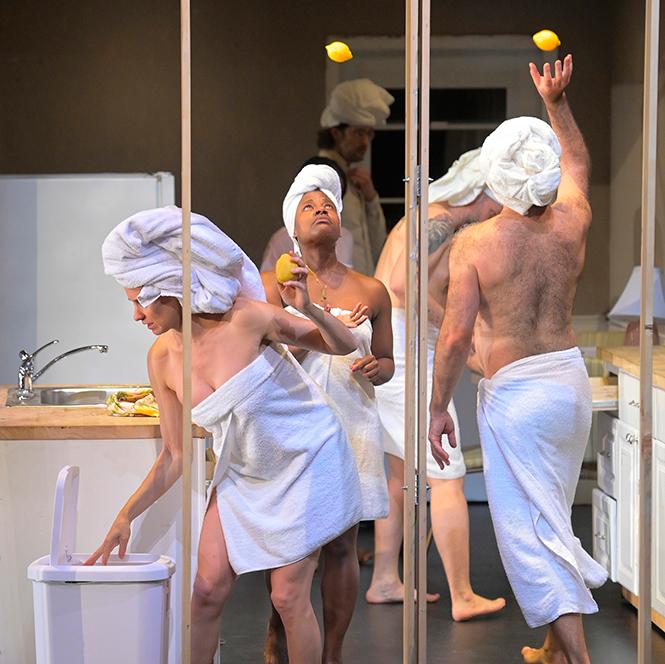 As a toddler, one of my favorite picture books was Richard Scarry's "What Do People Do All Day?," in which a city's buildings were illustrated with vitrine-like window walls and in dollhouse-style cross sections. I could peek inside and pore over the mundane details of dozens of their inhabitants' lives. As a university student, I discovered intriguing parallels in "Life, A User's Manual," in which the French writer George Perec imagines the overlapping histories of the people who live in a single Paris apartment block over the course of 50 years.

"Home," the virtually wordless movement theater piece now at the Berkeley Rep, takes the visual and descriptive power I discovered on those printed pages and brings it to life in stunning four-dimensional form. Four, because after Geoff Sobelle and his slyly synchronized corps of performers literally build and furnish the frame of a full-scale house on stage, they permeate its walls and hallways with the flow of time.

In a rush of dreamlike vignettes, compressed generations of residents simultaneously stream through the spaces, scurrying up and down the staircase, grabbing snacks from the fridge, showering in the single second-story bathroom. They are each others' unknown but benevolent guests, potential futures and transcended pasts. Long after the house is built, the act of building continues in this collective generation of energy. Quotidian ephemera stratifies to form a more durable soul-force. Residence takes on resonance. House becomes home.

At several intervals, a boy stands against a kitchen corner and a parent — sometimes mother, sometimes father — marks his changing height on the wall with a pencil. In the grand scheme of "Home," this tiny timeline, charted by a single family, has a tender inconsequence. But it's the tenderness that prevails, floating free of those fleeting moments to blend with the essence of a thousand others in a beautiful cumulus of shared meaning.

During the show's final third, Sobelle and company aim to further diffuse the notion of home beyond the physical. As garlands of party lights are strung from the stage through the audience ("the house" in theater parlance), the walls of the house that's been built are extended and grow porous. Members of the crowd are invited on stage to participate in a flowing series of milestone rituals: birthdays, a birth, graduation, a funeral. A brass band weaves through the set and the spectators. It's a communal celebration of everyday life and of every life's red-letter days.

While the message of inclusivity is sweet and clear, the stage quickly becomes clotted with a mass of people. For those spectators not literally invited to join the party, the show's visual and emotional impact are significantly dampened. "Home" sets such a fine philosophic example for its audience that it needn't offer hands-on instruction as well.

Still, this is a not-to-be-missed production, in which all of the theater arts are as poetically interconnected as the lives of the characters played by the seven-member cast. Under Lee Sunday Evans' masterful direction, Sobelle's concept, Christopher Kuhl's shimmering lighting, David Neumann's crosshatched choreography, Brandon Wolcott's genre-blending musical soundscapes, Steven Dufala's ingenious scenery, Steve Cuiffo's gossamer illusions and Karen Young's costumes weave together in an elegantly coherent vision. "Home" welcomes you to step outside of yourself and observe your place in something larger.