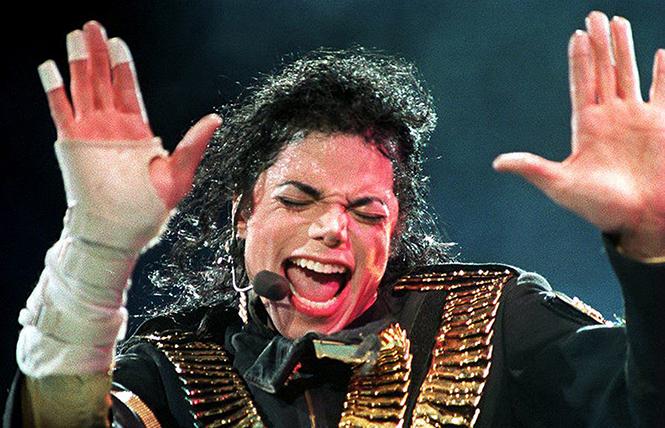 Michael Jackson was raised by an abusive, "tough-love" daddy to be an entertainer, and fronted the top-selling bubble-gum pop quintet The Jackson Five at an age when most kids are exiting pre-school. Jackson (born Detroit, 1958; died Los Angeles, 2009) was a fabulous, perhaps even "abominable" showman, a mega-star of a magnitude all but extinct in today's cyberspace. Sadly, he was also an intensely private, complex individual whose sexuality defied labels, but who allegedly sought underage partners.

This month HBO, in association with Britain's Channel Four, airs "Leaving Neverland" and "After Neverland," a three-part, five-hour docudrama-talk show featuring conversations with two men who claim to have been sexually abused by Jackson when they were grade-school-age children. Wade Robson (now 36, a professional choreographer) and James Safechuck (now 41) are the subjects of director Dan Reed's film, a buzz-stirring entry at 2019 Sundance. Both Australian-born Robson and California native Safechuck claim they and their family, especially their moms, were swept away by a Michael Jackson charm offensive, made to feel like family and invited into his inner sanctum, the sprawling Southern California Neverland ranch.

The actual news content of "Leaving Neverland" could easily be compressed into an episode of CBS newsmagazine "60 Minutes," with room for both the accusations against Jackson and a spirited rebuttal by the singer's family and estate. This "trial by media" follows actual courtroom trials in which Jackson was acquitted of child molestation charges, in both cases with supporting testimony from Robson and Safechuck. HBO's five-hour assault on the Michael Jackson legacy, with only a moment of rebuttal from the Jackson Estate read by Oprah Winfrey, feels oddly timed. So far the controversy has prompted boycotts of Jackson records by radio networks in Quebec and elsewhere.

At the same time, the succinct docudrama "Spotlight" is available on the Showtime network. "Spotlight," a 2015 feature film by Tom McCarthy starring Michael Keaton, dramatizes a Boston Globe investigative unit exposing systematic abuse of adolescent boys by New England-based Catholic priests. The film probes sexual misconduct within a powerful worldwide institution, rather than the idiosyncratic behavior of a dead superstar.

For me, the real problem with the HBO series arises with "After Neverland," a one-hour town-hall forum moderated by daytime TV diva Oprah Winfrey, a self-confessed survivor of domestic abuse. Led by the charismatic Winfrey, "After Neverland" plays like a religious revival meeting, the reputation of the late Jackson serving as a virtual pinata, with each survivor encouraged to take a whack.

Michael Jackson was an extraordinary figure, trespassing across a bewildering array of boundaries: class, race, gender and sexual orientation. Both as children and now as married adults with kids, Robson and Safechuck were in turn seduced and seemingly abandoned by this media pied piper, who appears to have sought relationships with boys ages seven-14. On the program both men argue that it was their experience as dads that caused them to recall experiences dating back as far as 1990.

"Leaving Neverland" contains a passing mention of child star Macaulay Culkin. Culkin was apparently one of the partners who bumped these boys from Jackson's bedchamber. Culkin, who continues to pursue an eclectic internet and cable TV career, has steadfastly denied that his time with Jackson involved abuse. Rather, Culkin, in a 2004 B.A.R. interview, discussed his problems with an overly controlling father.

"Leaving Neverland" can be seen on the HBO GO & NOW networks. The forum "After Neverland" will often follow the two-part/four-hour doc.