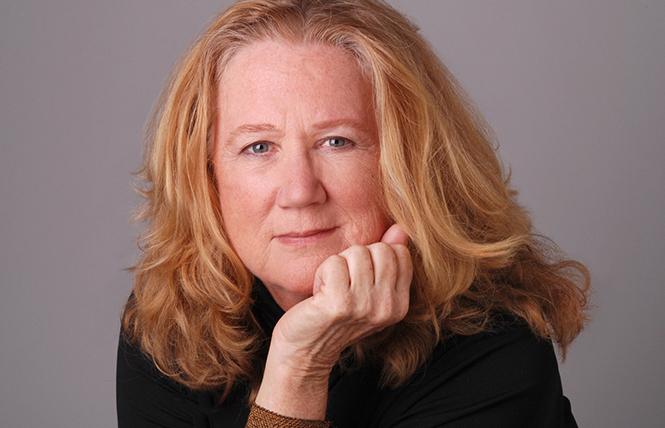 "I believe through the gentleness of song one can say, I invite you to your best self. But if you're not ready to go there, we're going to move onto the best of humanity, whether you come with us or not." That's a succinct statement expressing the philosophy of LGBTQ feminist singer-composer-activist Holly Near, one of the founders of the 1970s Women's Music movement, profiled in a new "American Masters" episode that premiered on PBS March 1, streamable throughout the month. Her friend Jane Fonda observes that Near's artistry unlocks the heart. Feminist guru Gloria Steinem credits Near with enabling her to experience music both communally and as a movement. Political activist Torie Osborne comments that Near has a gift for "bringing radical ideas into an all-American package to audiences, and inspires them in a way no one else has." This tribute documentary was released to commemorate Near's 70th birthday in June, but her career is ongoing, her crystalline voice lyrical as ever.

Born in Ukiah, she became involved in a local folk group at a young age. She rebelled early, fighting for girls to wear pants on Fridays in high school. Voted Homecoming Queen in her senior year, she acted in several TV shows including "The Partridge Family," as well as in B films, and was a cast member in the Broadway musical "Hair." Not thin, she knew she would be relegated to character parts, so she began focusing on music. She wrote the song "It Could Have Been Me" to protest the 1970 Kent State killings. In 1971 she joined the "Free the Army" tour, an anti-Vietnam War variety show with Jane Fonda. She met feminist women, and along with Meg Christian, Cris Williamson, and Margie Adam formed "Women on Wheels," a concert that toured California, where women "could express their full humanity in ways appropriate to them, as opposed to being defined by the dominant culture." Although previously identifying as heterosexual, she fell in love with Meg Christian and wrote the song "Imagine My Surprise" to announce her coming out as a lesbian in a 1976 interview with People magazine. Thousands of women came out as a result of hearing that song, and Near was named Woman of the Year by Ms. magazine.

In 1972 she became one of the first women to create an independent record company, Redwood, to produce her own music. She organized Women's Music Festival concerts so lesbians could legitimize themselves, believing music acts as an agent for social change. The concerts often led to workshops on political organizing. She linked together social justice movements in Latin America, especially Chile. Her anti-war concerts made her popular, but because some of her later concerts were for women only, men who liked her music felt excluded. Her career suffered, denying her money and mainstream fame.

Her most famous song, "Singing for Our Lives," virtually the LGBTQ national anthem, was written while driving to San Francisco after Supervisor Harvey Milk and Mayor George Moscone were assassinated. The song is part of the Unitarian hymnal, and has been sung in protests throughout the world. Near subsidized Redwood with her own money, then as a nonprofit, but it went bankrupt after 18 years. She wrote an autobiography, "Fire in the Rain, Singer in the Storm," looking back on her activism. It was adapted as a stage vehicle, but after a negative review, the producer cancelled the show.

She alienated her fans when she started a relationship with a man in 1994, arguing for fluidity in sexual orientation. When asked if she was gay, straight, or bisexual, she replied, "I'm monogamous. I don't know about the rest." She continues to tour, interested in gender-based violence and peace ventures, and released her 31st album last year. As this affectionate documentary makes clear, her daily experiences and politics are the source of Near's creativity. Steinem sums up Near best when she notes that all her causes speak to her same worldview, "that human beings are linked rather than ranked."