New production of a classic musical 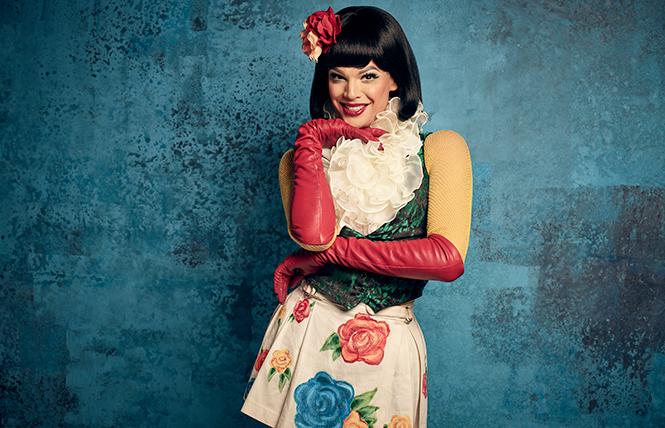 Fox will air a new, live production of the classic musical "Rent" on Sun., Jan. 27. First performed on Broadway in 1996, "Rent" is based on the opera "La Boheme." The show follows a group of impoverished young artists in NYC's East Village as they struggle to express themselves and to survive during the AIDS epidemic. "Rent" was an instant hit with the public, winning Tony Awards, running for 12 years and clocking in over 5,000 performances. It also garnered a cult following, "Rent-heads" who camped out at the Nederlander Theatre in New York for hours to get last-minute $20 tickets and see each show.

"Rent" is notable for including gay and lesbian characters at a time when LGBT people had not yet moved into the mainstream. One such character is Angel, an HIV+ drag queen. In "Rent Live," Angel will be portrayed by Valentina, a drag queen best-known as a ninth season contestant on "RuPaul's Drag Race." Valentina has also appeared on "America's Top Model."

"Angel is the heart of the story," Valentina tells the B.A.R., "a completely selfless person."

Valentina noted that playing Angel is the biggest artistic challenge she has ever faced. "I hope 'Rent' will be a stepping stone, but only if I put in the work," she said. "This is an iconic role for me to step into, and I'm very excited to be playing it. I definitely want to play more serious roles and to challenge myself. I'm very focused on the work I have to do, and I'm very blessed to have this dream job. Even when I'm tired I'm glad to be working at my dream job."

She described how she saw the story of "Rent." "It's about a group of struggling artists during the height of the HIV epidemic," she said. "They're trying to make the best of their lives when they're all facing death sentences. 'Rent' is about community, it's about love."

Michael Greif, who directed the original Broadway company of "Rent," feels that the story is as relevant today as ever.

"While the psychology of the characters, especially around the implications of a positive HIV diagnosis, has changed as more medications have become more effective in AIDS treatment, 'Rent' has always been about chosen family and our need to feel connected to a community in order to feel valued and loved," he said. "The love we're able to express to others directly relates to the love we receive. I hope this generosity will always remain relevant."

"I'm very proud that our original creative and producing team felt a commitment to depict these characters with the kind of diversity we'd actually find on the Lower East Side," Greif said. "Over the years so many of our most talented composers, lyricists, and actors working in today's musical theatre have told me how significant 'Rent' was to their development and inspiration. I am so thrilled that this broadcast will reach so many and inspire future theater-makers and policy-makers.

"I am certainly not saying that we were the first, but 'Rent' came along at a moment when it was important to remind everyone that musical theater could give voice to many whose voices weren't often heard, delivered by a youthful, diverse, and unknown cast. It helps remind everyone that successful musicals can be about contemporary, challenging subject matter."