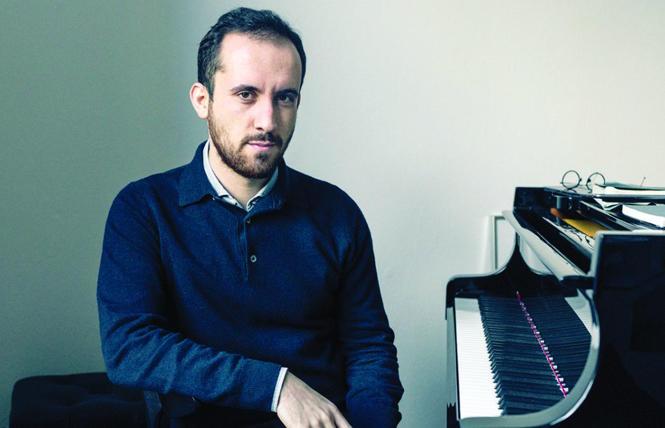 There are recordings and then there are deeds. Igor Levit likes deeds.

During the lockdown phase of the pandemic, Levit live-streamed nightly recitals from his Berlin apartment, for good measure playing Satie's "Vexations," as prescribed by the mad composer, "840 times in succession." Levit later autographed each of the single-page scores stacked in front of him for the 12 hours of his marathon, played as a benefit for other musicians similarly sidelined by COVID-19. The pages promptly sold out.

The 34-year-old has already convinced his label, Sony Classical, to bet on what have become his career-defining albums: Beethoven's late sonatas rendered early in the pianist's career and a trifecta of Beethoven's Diabelli Variations, Bach's Goldberg Variations, and Frederic Rzewski's The People United Will Never Be Defeated.

Now come some true pieces of the resistance: Shostakovich's 24 Preludes and Fugues, Op. 87, and Ronald Stevenson's towering Shostakovich tribute: the Passacaglia on DSCH.

Sony's new 3-CD set, On DSCH —the initials those of Dmitri Shostakovich in the German alphabet— is of course also available as a download, the advantage of which is that you can hear the whole cycle, at two and a half hours, uninterrupted. Levit, not the first pianist to have played the set that way in public, though it's been his habit, recommends it; a deed that gathers the pieces together to a climactic conclusion.

Tatiana Nikolaeva, the pianist for whom Shostakovich wrote the preludes and fugues, played its 1952 premiere, and recorded it three times, played it for the last time in San Francisco's Herbst Theatre in 1993. It was a wild night.

At the outset of the second of the two recitals into which Nikolaeva divided the fare, she commented, backstage, "Dmitri is here tonight." While performing the winding B-flat-minor Fugue, she began weaving at the piano bench, climbing, as it turned out, a stairway to heaven with Dmitri while sustaining the brain hemorrhage that took her off days later.

Both live and in the studio, her playing was a testimony to what one expert called, in the highest praise, the athletic tradition of Russian pianism. It is in that mode that Levit, too, plays the preludes and fugues, with unmistakable physicality —joy in the technical difficulties— and comparable mental and spiritual concentration. The individual pieces are sculpted out of silence, dance in pairs, and cumulatively celebrate the whole of human emotional experience.

The B-flat-minor pair revels in the exploratory freedom of its 17th-century forebears, and the influence of Bach, Nikolaeva's other specialty, is immediate throughout. But this is not "Bach with wrong notes." Nikolaeva got them as the ink was drying on the pages, and Levit plays them as if they were composed today, or improvised by a musician of his acumen.

Levit notes that it was his initial failure (his word, in English) with the technically formidable Stevenson Passacaglia that stood in the way of his performing it for years. Having mastered it, he now plays it only for the most discerning audiences —for example, at London's Wigmore Hall and at the recently concluded Salzburg Festival— where his playing is most exposed.

The sheer athleticism of Levit's performance, clearly audible even in this studio recording, is part and parcel of the interpretation, not a by-product or in any way incidental. It's patently political music by the most openly political of today's star musicians — a celebration of Stevenson as Stevenson's 90-minute, three-part, uninterrupted work was of Shostakovich, both unafraid of counting clamor among the virtues. Short of hearing this kaleidoscopic music in a future pair of recitals (San Francisco Performances, are you up for an encore?), this is as close to this cosmic music as most of us are likely to get.

The B-A-C-H motive is sounded, its D-S-C-H echo is literally hundreds of times; triple fugues are scattered like acorns on the ground. There's a world in this Passacaglia —a threnody for the lost six million; a Scottish lament for children; a whole Bach keyboard suite reimagined— vivid even when austere, bright even in its densest, darkest passages. Stevenson explicitly asks that one section be played with a Gagarian sense of space, referring directly to Soviet cosmonaut Yuri Gagarin.

What we now have, in Levit's realization of Stevenson's apostrophe to Shostakovich, is nothing short of a parliament of musical ecstatics.

The day after the release of On DSCH into Earth's atmosphere, the out young Russian pianist Pavel Kolesnikov played the first-ever solo-piano recital at a full-house Royal Albert Hall performance at the BBC Proms, not incidentally playing Bach's Goldberg Variations, audible at https://www.bbc.co.uk/programmes/m000zbyy for several more weeks.
It's nothing short of a Promethian seizure of the piece back into the repertoire of the modern piano — dynamics spangled, rhythms freed — subduing an audience of more than 5000 before driving them deliriously mad. Like Levit's Stevenson, it has to be heard to be believed.