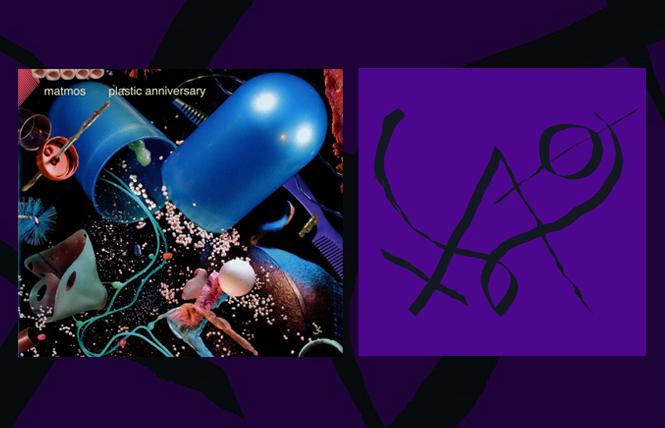 For more than 20 years, professionally and personally linked duo Drew Daniel and M.C. Schmidt, the leaders of Baltimore-based electronic act Matmos, have been thinking far outside the box when it comes to instrumentation and musical resources. From the sounds of surgery to cow organs, from antique synths to parapsychological visions, Matmos never fails to illuminate and invigorate. Marking both the anniversary of the couple's relationship as well as society's relationship to plastic, "Plastic Anniversary" (Thrill Jockey) ranks as one of Matmos' most exhilarating and accessible albums. In addition to listing the plastic materials that became the source of the music, the liner notes also include unusual descriptions of some of the songs. Take "Breaking Bread," which consists of the breaking of vinyl LPs and singles by "the soft rock group Bread." The Philip Glass-like "The Crying Pill" features an ATM card and an exercise ball. The titles of "Interior With Billiard Balls & Synthetic Fat" and "Silicone Gel Implant" only tell half the story.

Led by queer singer-songwriter Jamie Stewart, experimental noise-pop band Xiu Xiu has been enthralling listeners throughout the 21st century, and its new album "Girl with Basket of Fruit" (Polyvinyl) is no exception. The screeching title track sounds like it owes more to the girl with the dragon tattoo than it does to any Titian painting. It's not surprising to find "a pig wearing a maid's apron and cap/riding a tomato on rubber wheels" in the sampled "It Comes Out as a Joke," and one can only imagine what is being "puff puffed" in "Ice Cream Truck." "Pumpkin Attack on Mommy and Daddy" is terrifying, and the cut-and-paste beats of "Scisssssssors" could give you whiplash. The unexpected beauty of album closer "Normal Love" comes as something of a relief.

Stateside, the colorful and fluffy Rainbow Kitten Surprise continues to enjoy the warm reception received by its 2018 major label debut album "How to: Friend, Love, Freefall" (Elektra). Led by recently out frontman Sam Melo, Rainbow Kitten Surprise makes distinctive R&B-spiked folk pop. They reach a fever pitch on the hot "Matchbox," choral a cappella of "Pacific Love" the otherworldly "Mission to Mars," the queer "Hide" and the country cabaret of "Polite Company."

Queer people show up in the most unlikely places in the rock-n-roll world. Take UK-born lesbian drummer Hayley Cramer. She pounds the skins for Great Lakes-region band Pop Evil. She drums up a storm on the band's eponymous eOne album on songs "Colors Bleed," "Ex Machina" and "Waking Lions". Cramer's presence may also have something to do with the sensitivity found in "A Crime To Remember" and its companion music video, a powerful song about the current state of divisiveness in America.

Some bands are queer by association. Death Cab for Cutie frontman Ben Gibbard, who has a lesbian sister, is an outspoken LGBTQ advocate. His electronic-oriented side project The Postal Service was a source of exceptional dance music, including the single "Such Great Heights," later covered by lesbian singer-songwriter Melissa Ferrick. DCFC has also dabbled with electronic beats in recent years, including on the band's latest LP, "Thank You for Today" (Atlantic/Barsuk). Its "Gold Rush" features a sample of Yoko Ono's "Mind Train."

Out actor Christopher Sieber is among the performers you will hear on "The Prom: Original Broadway Cast Recording" (Masterworks). Created by Bob Martin, Chad Beguelin and Matthew Sklar, the musical comedy, based on a small-town school controversy involving a lesbian student who was denied the right to bring a female date to the prom, features four self-involved Broadway stars who become embroiled in the hullabaloo.