Classic Italian cinema gets its due 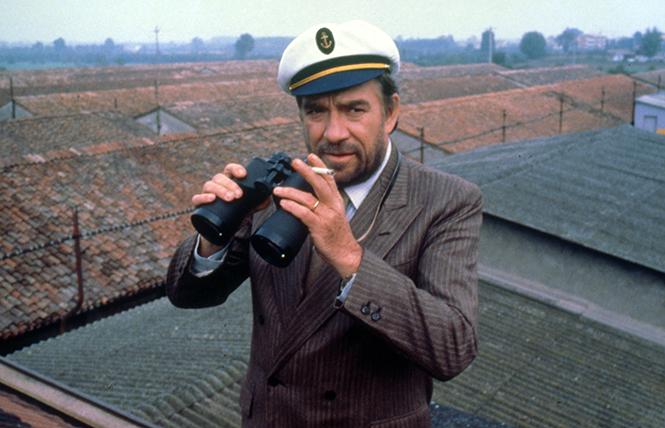 With the queer classic "La Cage aux Folles" as its centerpiece, the Castro Theatre spotlights the films of actor, writer, director Ugo Tognazzi (1922-90) on Sat., April 27. With a resume totaling over 150 films, Tognazzi was a mainstay of what is now recalled as a Golden Age of Italian Cinema: the early 70s through the early 80s.

"Property is No Longer a Theft" (1973) Elio Petri offers a powerful film noir that operates on a visceral, sexual, economic, philosophical and even metaphysical level, exploring the peculiar relationships between haves and the have-nots in a modern urban society like post-WWII Italy.

At the heart of the film is a neurotic young bank clerk, Total, in a mesmerizing performance by the then-26-year-old novice film actor Flavio Bucci. Sporting a lean-and-hungry look like one of Dickens' street urchins, Total is a furtive lad who sets out to rob a wealthy butcher (Ugo Tognazzi) of his knife, some precious family heirlooms and his young girlfriend (Daria Nicolodi). Featuring a score by the noted film composer Ennio Morricone, this is a powerful and socially relevant film. (10 a.m.)

"Tragedy of a Ridiculous Man" (1981) Bernardo Bertolucci, an artist responsible for cinema classics from 1970's "The Conformist," with its sinister mix of Fascist politics and outlaw queer sex, through 2003's political-erotic drama "The Dreamers," here presents a chilly melodrama where Tognazzi is the owner of a near-bankrupt factory forced to consent to the kidnapping of his son as a means of saving the business. (12:45 p.m.)

"In the Name of the Italian People" (1971) Dino Risi directs a political farce whose themes are extremely relevant to our current politics. A ruthless industrialist (Vittorio Gassman) attempts to squirm out of responsibility for the murder of a young woman, by committing his elderly dad to an asylum to prevent him from talking to a judge (Ugo Tognazzi). Like the best films of the era, "In the Name of the Italian People" plays like a political screwball comedy, with jokes concerning bribes, influence peddling and industrial pollution. (3:30 p.m.) 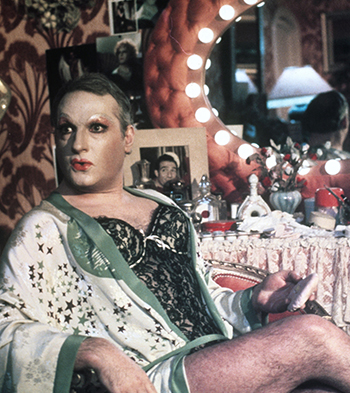 "La Cage aux Folles" ("Birds of a Feather") (1978) Tognazzi is Renaldo, the owner of a unique nightclub where his lover of 20 years, Albin (Michel Serrault), wows an urbane clientele in a musical drag act. In the first act, while Albin is onstage, Renaldo entertains a young male guest. At first we suppose Renaldo and the longhair 20-year-old are lovers. But in fact Laurent (Remi Laurent) is Renaldo's son, the product of a 90-minute liaison with the opposite sex. The kid, nicknamed "the Little White Master" by the barefoot black butler, has come on a cruel mission: he wants Renaldo to send Albin away so that Laurent can invite his young bride-to-be's conservative parents over to inspect their future son-in-law's pedigree. Edouard Molinaro directs one of the most popular foreign-language films ever released in America. Two sequels followed. In 1996, Mike Nichols directed Robin Williams, Nathan Lane and Gene Hackman in an English-language version scripted by Elaine May. Sadly, the lovely actor Remi Laurent (1957-89), died from complications from AIDS. (6:30 p.m.)

"La Grande Bouffe" (1973) The Ugo marathon concludes with a gourmet adventure that is the very definition of a 70s "take no prisoners" approach to art-house cinema. The premise is simple: four middle-aged men, best friends, sophisticated, and frankly, bored with life as they've known it, come to a Parisian villa to eat themselves to death. Director Marco Ferreri's ambition was to create a film experience as shocking and outrageous as Passolini's "Salo." This time, the subject would be culinary decadence on a scale almost certain to offend middle-class sensibilities.

Ferreri's ace-in-the-hole was a quartet of European actors at the top of their game: Marcello Mastroianni, Michel Piccoli, Philippe Noiret and Tognazzi. The actors were surrounded by rich food, and would literally "pig out" for the entire production. Behind the cameras stood an army of expert chefs. One challenge to sitting through all 130 minutes of "La Grande Bouffe" is that it contains a complicated evocation of how food can summon up many dark and disturbing aspects of the human experience. As critic Roger Ebert once opined, "It's an experience that hammers your sensibilities!" (10 p.m.)

Individual admissions, or an all-day Festival Pass that includes the party. www.cinemaitaliaSF.com