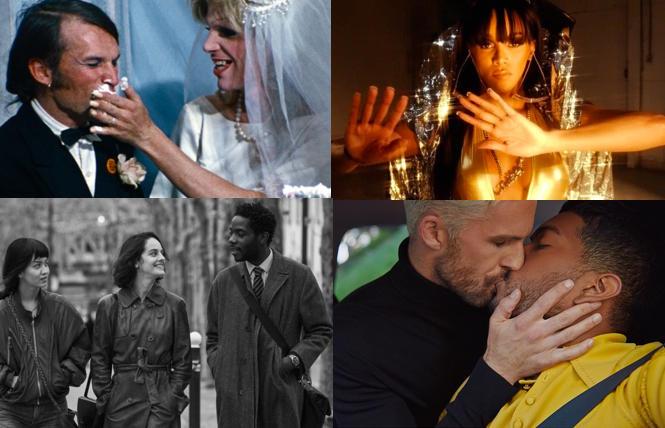 Frameline's special Fall Showcase, held on November 11 and 12, will feature four in-person screenings at the Castro Theatre, which had reopened for a weekend at the end of June after a 15-month closure.

Executive Director James Woolley hopes that Frameline's Fall Showcase "will give audiences a taste of the full in-person festival we have planned for Frameline46 in 2022."
New Director of Programming Allegra Madsen hints at what the films will explore in the upcoming weekend.

"The first evening are glimpses of different types of queer political participation, both inside and outside our nation's power structures. The second evening is a look at the fluidity of sex, sexuality, and shifting modern relationships norms." She claims both nights will feature hilarious, poignant, and sexy moments in queer cinema.

Surprisingly, it is a 50-year-old film, Tricia's Wedding, in a brand new 4K restoration, funded by Frameline and Outfest UCLA Legacy Project, that may be the pinnacle of the weekend. The 31-minute film is the Cockette's outrageous reenactment of Tricia Nixon's (daughter of you know who) White House wedding to Edward Cox on June 11, 1971. The Cockettes were an avant-garde psychedelic theater group based in San Francisco's Haight Ashbury who dressed in "genderfuck" drag.

Intermittently funny, but historically significant since Tricia's Wedding was one of the first drag movies, an antecedent to Peaches Christ or a show like Christmas with the Crawfords.

The Cockettes only performed from 1969 to 1972, but if you want to learn more about them, the 2002 documentary, The Cockettes, directed by SF's David Weissman and Bill Weber, is highly recommended.

As if to add to the absurdity of the proceedings, H.R. Haldeman, President Nixon's chief of staff, arranged for a secret screening of Tricia's Wedding for staffers in a hidden bomb shelter at the White House. Belated Happy 50th anniversary, Tricia and Ed!

Mayor Pete, directed by filmmaker Jesse Moss (Boys State), focuses on Pete Buttigieg's 2020 campaign to become both the youngest and the first gay president of the U.S. Moss was given intimate access to the candidate, his husband Chasten, and their ambitious election team, starting from a year before the Iowa Caucuses.

Moss created one of the best documentaries of last year, Boys State, a suspenseful examination of 1000 teenage boys in Austin, Texas trying to build a representative government from the ground up, despite their divisions. Mayor Pete, his sophomore effort, lacks the exciting drama and poignant punch of Boys State, opting for a competent, traditional documentary that feels like an elongated campaign ad.

Oddly, there is no background history presented about Buttigieg, his family, childhood, education, South Bend, Indiana mayoral career, and why he decided to run for President, nor any real discussion about how the effects of being closeted until age 33 impacted his life and ambitions.

At one point, while preparing for a debate, his campaign communications director yells at him, "You sound like the Tin Man." Buttigieg is a policy wonk like Bill Clinton, but lacks his charisma. He exhibits little emotion or warmth.

The real star of Mayor Pete is his husband Chasten, who is more engaging, animated, and authentic than his spouse. In private questions asked by Moss, Buttigieg comes across as subdued, stoic with answers sounding rote, even intermittently robotic. He appears unable or unwilling to reveal himself personally beyond basic superficialities. Chasten comments at one point, "Pete keeps a lot bottled up inside."

Buttigieg currently serves as the U.S. Secretary of Transportation, the first openly gay Senate-confirmed Cabinet member in U.S. history. Buttigieg has the intellect, energy, and drive to go far in politics, but Mayor Pete should have been inspirational yet seems flat, more indicative of the film's subject than its filmmaker.

Terry justifies his boorish behavior claiming marriage and monogamy are shams anyway, as well as his mistaken belief that Wyatt really desires him. Upon reading this description, you might be asking yourself is this film as awful as it sounds, and the answer is, yes, it is.

There are neurotic odd-ball bridesmaids, a Titanic-themed bachelorette party, and the film fancies itself as a queer parody of My Best Friend's Wedding, which featured a gay best man attending his BFF's wedding. There is the occasional sassy one-liner, but Bridesman is chock full of one-liners with myriads of pop culture references, most of which sink.

In the middle of this disaster (to keep with the Titanic theme) comes a shameless plug for Grindr. Mercifully short, the series can never get beyond the nauseating premise of your best friend sabotaging the supposedly greatest day of your life.

32-year-old Nora, while pursuing a law degree, attends a student party wearing a black wig and gets mistaken for a kinky cam girl Amber, who's a popular internet sex worker. Bullying classmates leads to Nora abandoning her career goals. She meets and becomes Camille's Friend With Benefits, then winds up befriending Amber in a series of paid video chats.

Shot in artsy black and white, the film boasts lots of sex scenes and candid talk about sexuality. Based on a series of comic book short stories by Adrian Tomine, the film expounds on the difficulties of 20-somethings in finding love. Reviews have been mixed, the chief criticism that there is a coldness to the proceedings with little character development, and the diverse self-absorbed characters lack passion for each other or their lives. The film poses the question whether relationships are possible in such a quickly-changing modern world.

San Francisco Transgender Film Festival
Founded in 1997 as the world's first transgender/gender-nonconforming film festival, the San Francisco Transgender Film Festival will run online from November 11-14, with a rich offering of seven new short film programs and 42 films, featuring a range of genres. All programs are offered on a pay-what-you-can sliding scale and are close-captioned for Deaf and hard-of-hearing audiences.

Shawna Virago, SFTFF's artistic director, commented, "This year's festival features powerful and vibrant film works that showcase trans and gender-non-conforming communities' resilience and strength along with their street smarts, sass, sexuality, friendship, humor, and courage. It's deeply personal and imperative to tell our trans stories —the stories that mainstream media platforms aren't interested in telling— and share our filmmakers' creative visions with audiences worldwide, making these films accessible from the comfort of home."

The wide-ranging subject matter is evident in each of the seven programs, including these films:

Boysugar: Levi, a trans-masculine drag performer, persuaded by a friend to come to the bar and perform, finds himself in a compromising situation when he is outed by another jealous drag queen. Nimzo: On the anniversary of the day his sister died, Nimzo decides to confront the retired air traffic controller responsible for the plane crash.

Veni Etiam: The story of a gondola and its gondolier navigating through the canals of Venice. Gender X portrays the life and challenges of transgender women in Pakistan today, as they talk about self-image, vulnerability, and the fight for justice. Before Bacchae Before: A trans-queer, dance-theater takedown of gender reveal parties that culminates in a ritual for the trans kids we want futures for.