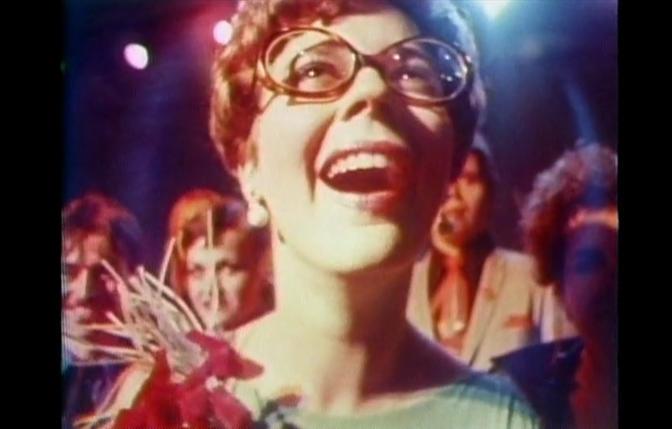 Ann Block as Marci in 'Whatever Happened to Susan Jane?'

At nearly one hour, Marc Heustis' eccentric and campy film Whatever Happened to Susan Jane? embodies the early 1980s of New Wave, drag queens and wild characters through the misadventures of runaway Virginia housewife Marci Clark McDonald (Ann Block) as she discovers the more unusual characters of San Francisco while tracking down her high school friend Susan Jane (Francesca Rosa). The director is now showing the movie free online, but tips are appreciated.

From their first reunion (shot at Café Flore), cheerful Marci remains oblivious to shade thrown at her by Susan Jane and her pals. The film also includes tied-in excerpts from a vintage short film about a high school loner Susan Jane, and music by Tuxedo Moon, Noh Mercy, Ben Bossi of Romeo Void, and Indoor Life.

The big finale features a rousing performance by the legendary Wasp Women, where, at a warehouse party (now Z Space on Florida St.), a nerdy news reporter interviews an array of people, including supervisor candidate Nova, and members of The Angels of Light. Meanwhile, Marci gets high and digs the scene.

Despite the arty style, the story takes a quaint traditional turn. Like the retro instructional clips, lessons about friendship, acceptance, and defying conformity are learned.

As one of the participants in the early film fest Zeitgeist 1977 —what eventually became the Frameline LGBTQ International Film Festival— Huestis is also known for his numerous stage shows at the Castro Theatre celebrating film and TV stars with the screenings, interviews and drag tributes.

Huestis recounted those glory days, as well as the ups and downs of his life and career, in his acclaimed recently-published memoir, Impresario of Castro Street: an Intimate Showbiz Memoir.