The Castro Theatre does April 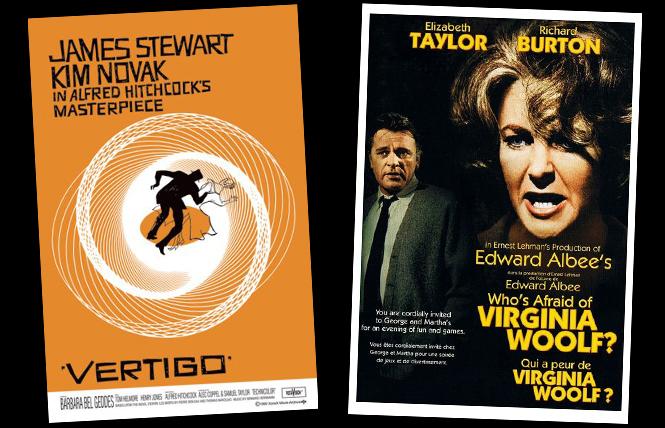 "Vertigo" (1958) Of the 53 films in the Alfred Hitchcock resume, this unsettling San Francisco-set drama had the hardest time with contemporary critics and the filmgoing public. Featuring the final and perhaps boldest of James Stewart's four turns for Hitch, the film (based on a French novel by Pierre Boileau and Thomas Nancejac) pivots on the weakness of Scotty, a retired police detective (Stewart) whose attempts to solve a crime and save a young woman (amazing Kim Novak) backfire. A great home exercise before renewing your relationship with "Vertigo" is to climb onto a kitchen stool set close but not too close to an open window. Now you're Scotty: let the fun begin. With Barbara Bel Geddes, and a haunting Bernard Hermann score. (4/3-6)

"Pal Joey" (1957) Novak returns as a naive aspiring showgirl who falls under the spell of nightclub singer Frank Sinatra. Based on a collection of John O'Hara stories and a 1940 Broadway show. The conflict arises when Rita Hayworth's wealthy patron agrees to furnish the dough for the singer's own club. Featuring timeless Sinatra takes on Rodgers & Hart classics "The Lady is a Tramp," "Bewitched, Bothered and Bewildered," directed by George Sidney. (4/4)

"San Francisco" (1936) Castro veterans revel in the nightly organ rendition of the title tune from S. Van Dyke II's lively telling of the great 1906 city-leveling quake. The special effects from this pre-digital masterpiece are still breathtaking, and the cast is without peer, headed by Clark Gable, Spencer Tracy, and Jeanette MacDonald. (4/6)

"Gallipoli" (1981) Aussie director Peter Weir's brilliant betrayal-of-innocence drama finds youthful buddies Mark Lee and Mel Gibson having the time of their young lives before cruel fate delivers them into the meat-grinder of WWI's grimmest tragedy. The final freeze-frame shot of a young soldier at the moment of his death is one of the most poignant moments in modern cinema. It tops all other anti-war statements. Plays with "They Shall Not Grow Old." (4/22)

"Who's Afraid of Virginia Woolf?" (1966) Edward Albee's 1962 stage drama gets a perfect widescreen B&W treatment from first-time director Mike Nichols. Richard Burton and Elizabeth Taylor rock as an aging academic couple with secrets galore. Those secrets come tumbling out in a 131-minute dramatic exorcism that laid the groundwork for the last half-century of American adult cinema. With a great supporting turn from a young George Segal.

"Mulholland Drive" (2001) If David Lynch is your taboo-smashing cup of tea, this latter-day noir is must viewing. A young actress arrives in Hollywood and uncovers the plight of a woman with memory lapses. With Naomi Watts, Ann Miller, Robert Foster, Billy Ray Cyrus, Lee Grant, Chad Everett and others. Plays with "L'important c'est d'Aimer." (4/25)

"Wings of Desire" (1988) Wim Wenders' delightful tale of angels hovering over the then-divided city of Berlin and wondering what it's like to be human. With Bruno Ganz and Peter Falk.

"The American Friend" (1977) Wenders adapts Patricia Highsmith's "Ripley's Game" into a meditation on American gangster movies. Dennis Hopper is the title character in a story that pivots on an assassination attempt on a mobster. With supporting roles for American directors Nicholas Ray and Sam Fuller. (both