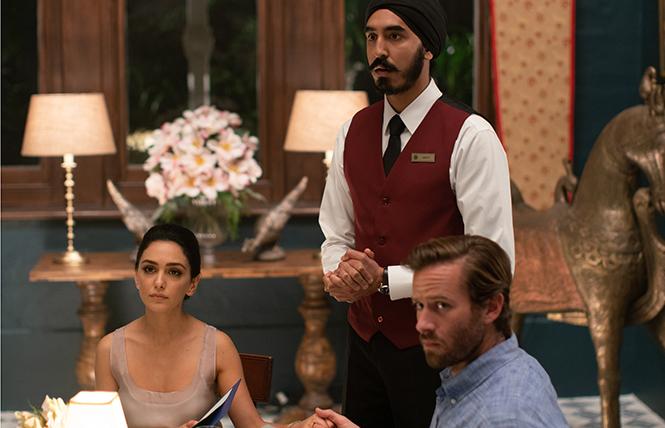 This week a brilliant new docudrama, illustrating the nastiest features of today's international climate, arrives from Australian director Anthony Maras and producer Julie Ryan. Opening Friday in Bay Area theaters, "Hotel Mumbai" is a powerful if awkwardly timed tutorial about just how hard it is to be a courageous global citizen in an era when all decent values appear to have been swept aside by hate-fueled religious extremism or right-wing authorities.

"Hotel Mumbai" opens on the heels of the terrorist attack against unarmed Islamic worshipers in Christchurch, New Zealand, It dramatizes, with skill and at times almost unbearable verisimilitude, the murderous 2008 attack on a Mumbai, India hotel, chosen by its diabolical plotters for its appeal to foreign tourists. A disembodied older voice exhorts a cadre of ill-educated young gunmen on how to maximize the propaganda value of their rampage: single out Western tourists for display before dispatching them with military assault weapons.

The movie deftly dramatizes the courage and ingenuity of a dedicated hotel staff, including the renowned chef Hemant Oberoi (Anupam Kher) and a fearless waiter (Oscar nominee Dev Patel) who risk their lives to protect their guests. Crusty old film critics are often hardened against films that claim to be "based on true events" because of the distortion that creeps into the storytelling process, which inevitably involves compressing the time frame of complex human tragedies. The makers of "Hotel Mumbai" effectively demonstrate how the hotel guests, desperate to survive, could see how slowly the Indian government was responding to the event. At one point, effective help is seen to be over 800 miles away. This makes it even harder for the chef and the waiter to instruct their charges how not to fall victim to the militants, while assuring the naive and hysterical Westerners that the waiter's headscarf doesn't make him a terrorist. "Hotel Mumbai" makes the case that truth has to be responsibly conveyed, even about an ongoing terrorist attack. In this case, Indian citizens and governmental leaders had to learn how to make subtle judgments about friends and foes, often literally before the smoke cleared.

The drama is preoccupied with the plight of a young vacationing couple, American Armie Hammer ("Call Me by Your Name") and British-Iranian Nazanin Boniadi ("Homeland"). They want to survive and shield their infant child from harm until help arrives, from seemingly complacent and ill-prepared Indian military and police forces. But one must salute the courage of the young actors who so vividly portray the ruthless young killers. Just as with actors who have portrayed terrible villains in the past, whether in "Casablanca" or "12 Years a Slave," the better they serve their craft, the more difficult it may be for a general audience to separate the actor from the distasteful act.