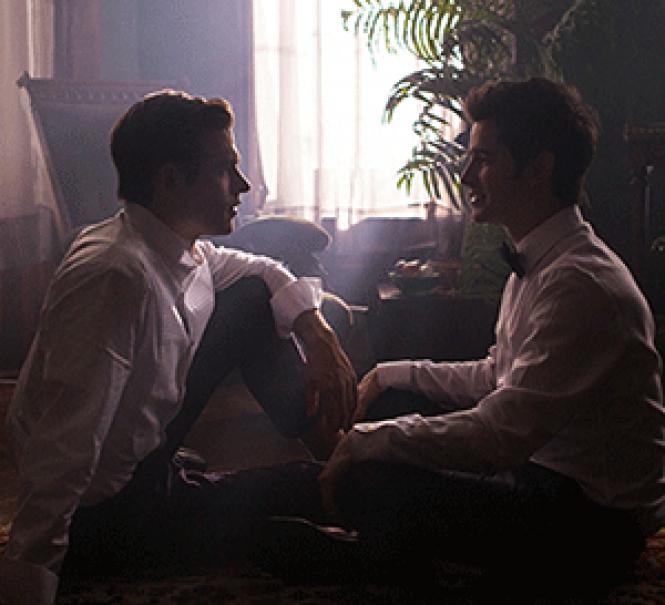 July brings the 35th edition of the San Francisco Jewish Film Festival, July 23-Aug. 2 at the Castro Theatre; July 25-30 at Palo Alto's Cinearts; July 31-Aug. 6 at Berkeley's California Theatre; Aug. 7-9 at Oakland's Lakeside Theater; and Aug. 7-9 at San Rafael's Christopher B. Smith Rafael Film Center. This year the fest features an especially eclectic collection of films, ranging from a history of the kosher hot dog (Famous Nathan ) to the absurd stylings of The Singing Abortionist.

Mind/Game: The Unquiet Journey of Chamique Holdsclaw Rick Goldsmith presents the disturbing story of how a talented Queens, NY high school basketball star, at one time thought to be the female Michael Jordan, finds her high-velocity career derailed by bouts of bi-polar depression. Goldsmith uses his special access to his subject to craft a complex portrait of the pressures that big-time athletics can bring to bear on a young woman already striving to be a "super kid." Chamique Holdsclaw can protect her younger siblings from the ravages of their parents' alcoholism while attempting to scale heights courtside never before achieved by even the most gifted women athletes. (Castro, 7/31; California, 8/1. Director Goldsmith and Holdsclaw will appear for a post-film Q&A.)

Love & Taxes "Why do they only pay for things you don't want to do?" Josh Kornbluth has neatly fashioned the perfect artistic hybrid: a monologue that rolls out like a fully staged play on film, and a film that features the quirky asides normally only encountered in live theatre. Kornbluth and director brother Jacob have produced a work so special that it features its own version of scholarly footnotes in the form of a post-film Q&A from famed economist Robert Reich, at the Castro. (Castro, 7/29; California, 8/3)

The Singing Abortionist Dara Bratt's exuberant portrait of a nebbish everyman is a textbook case of the kind of stories that draw us to the Jewish Film Fest. Henry Morgentaler is short, skinny, with an unkempt beard and a determined gleam in his eyes. A survivor of the Nazi death camps, Henry leaves Poland for a fresh start in Canada, where he marries, starts a large family and begins a medical practice that turns him into one of his adopted homeland's most unpopular public figures. A chilling highpoint comes from archival TV news footage of Henry getting a police escort to escape the furious mobs on the street in front of his modest bungalow. Anti-abortion mobs hurl insults and wield their "baby murderer" signs like axes.

Henry's life appears riddled with paradox, as one of his adult sons notes. "In psychology, we see people return to the scene of the crime. So if you had a mother or father who abused you, often you find partners where you recreate the situation. You're going to make this one a success where before you were a victim. In some ways, my dad also returned to the scene of the crime: he was in concentration camps, there were guards, he had no privileges. He put himself in a situation where that was going to happen again."

A story that seems to pinpoint the contradictions in Henry's soul comes from his brother, himself a death camp survivor. The brother notes that Henry, while a prisoner on a Nazi train headed to the ovens, got so caught up in a conversation with a fellow inmate that he was almost left behind when prisoners jumped from the train, fleeing into the woods. Who did the singing abortionist sing for? Mostly the women on his operating table, certainly one of history's more improbable captive audiences. (Castro, 7/31; California, 8/5)

As I AM: The Life and Times of DJ AM Kevin Kerslake brings the tragically short life of a fabled club DJ to the screen, shedding light on a musical subculture. The life arc of DJ AM (aka Adam Goldstein) is a sadly familiar one: charismatic kid is seduced by a music scene that becomes a way of life, complete with dangerous excursions into an underground drug scene. We follow DJ AM from his native Philly to a seductive LA subculture where he would become a savior to many addicted kids before abruptly dying from an overdose at 36. (Castro, 7/30; California, 7/31)

The Go-Go Boys: The Inside Story of Cannon Films Their body of work was insanely eclectic. Israeli cousins Menahem Golan and Yoram Globus, themselves lowbrows, improbably began serving a high-brow cinema audience as importers of such esoteric art-house fare as Jean-Luc Godard's King Lear. But their bread-and-butter output came from the funkier side of the tracks, from seemingly endless Charles Bronson action sagas to Russian director Andrei Konchalovsky's action thriller Runaway Train. Israeli director Hila Medalia gives us an entertaining peek behind the scenes of a singular film empire stretching from Tel Aviv to Hollywood. (Castro, 7/25; Cinearts, 7/27; California, 8/2; Smith Rafael, 8/9)

Probation Time In one of the more challenging emotional rides at this year's festival, director Avigail Sperber casts a telling eye on Israel's uncomfortable relationship with its Ethiopian minority in this compelling family drama. (Castro, 7/27; California, 8/3)

Claude Lanzmann: Spectres of the Shoah He set himself a big challenge: produce the first comprehensive documentary/oral history of the Holocaust without showing the familiar footage of death-camp ovens and human-skeleton survivors. 1985's nine-hour Shoah gives those willing to engage with this most painful chapter a candid account of how humankind's most revealing catastrophe went from unimaginable to inevitable. My viewing of Shoah has shaped my perspective on Holocaust history on film. One chapter that I'll never erase is a candid chat with a former death-camp worker who provides a chilling account of the minutia of mass murder. This 40-minute doc plays on a shorts program. (Castro,7/28; CineArts, 7/30; California, 8/4)

The book of Daniel: an interview with gay writer Daniel M. Jaffe
Sign up!