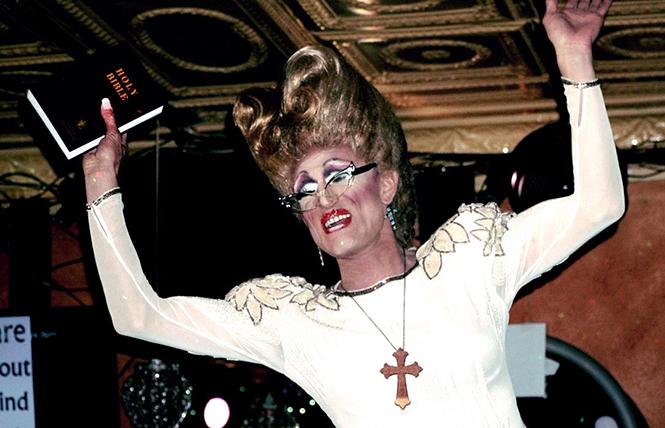 "The Gospel of Eureka," a new documentary by Michael Palmieri and Donal Mosher, is the perfect antidote to the divisiveness being inflamed by the current administration. The film (Kino Lorber DVD) paints a lovely portrait of Eureka Springs, Arkansas, a Bible Belt town that's home to a thriving LGBT community, many of whom are devout Christians. Short and sweet, the film is narrated by cabaret chanteuse and former San Franciscan Mx. Justin Vivian Bond. 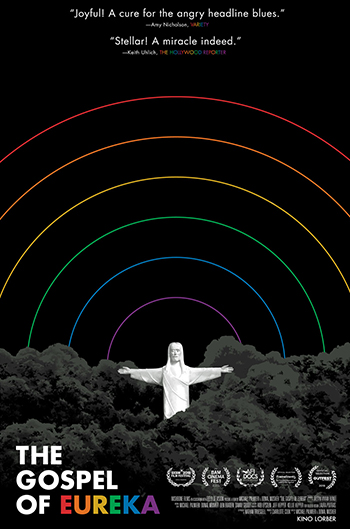 Looming over Eureka Springs, the first municipality in Arkansas to issue same-sex marriage licenses, is Christ of the Ozarks, the largest statue of Jesus in North America. The town also hosts an annual Passion Play that attracts huge crowds each year. Only a stone's throw away from the statue is a gay bar owned by a married gay couple who refer to their watering hole as "the hillbilly Studio 54." The bar features drag shows that are a little bit different from what viewers might expect: outrageously dressed queens lip-sync to songs that have religious themes. ("You can't pray the gay away, no matter what your preacher says.")

The residents of Eureka Springs are not what you'd normally find in the Bible Belt. Viewers will meet a devout trans woman who sees no disconnect between her faith and her transitioning. "God has no problem with me," she says. "I see faith as a reason for who I am."

Other town residents include a gay pastor whose supportive straight son owns a Christian T-shirt shop, and a straight dad who teaches his children about tolerance.

But not everyone in Eureka Springs is happy with the town's diversity. As queers and supporters campaign for the passage of Non-Discrimination Ordinance 2223, which would offer legal protections to the town's LGBT population, one man expresses his extreme displeasure. "This town is getting too permissive," he says, "and I don't like it."

A big part of the film focuses on the elaborate Passion Play, which tells, in larger-than-life style, the story of Jesus Christ. Scenes of the Passion Play are juxtaposed with footage shot inside the gay bar, where people drink, dance, and applaud the drag performers.

The filmmakers do not comment on the goings on in Eureka Springs, they merely present what is, reminding viewers that the town wasn't always the peaceful and accepting hamlet that it now is. The Christ of the Ozarks statue was commissioned in 1966 by Gerald L.K. Smith, an extremist, anti-Semitic preacher whose rhetoric has since been rejected by the town. Eureka Springs now fully embraces its commitment to equality and fairness. Non-Discrimination Ordinance 2223 passed by a wide margin.

So how did this Bible Belt community become so accepting and so diverse? That's never explained, and no explanation is necessary. What the people of Eureka Springs eloquently illustrate is what the world could be like, if only we would let it be so.