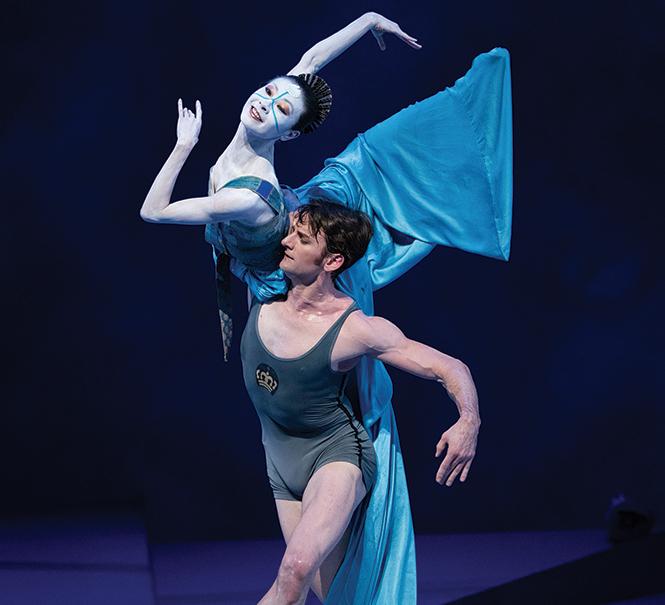 It was déjà vu all over again as San Francisco Ballet danced "The Little Mermaid" in a revival of the 2010 production last Friday night at the Opera House. The production is at least as well-done as last time, it runs through April 28, and is well worth seeing as an example of how to use all the theatrical resources of an opera house to stage a melodrama. SFB has staged John Neumeier's stunning spectacle (new in 2005, when it inaugurated the new opera house in Copenhagen harbor, and was dedicated to Queen Margrethe II of Denmark) in a version updated for SFB's dancers by Neumeier himself, and it is a spectacle of uncommon power. But the choreography is for the most part merely decorative, and in most respects the production, though stunning in its details, is overblown, excessive, and pounds its points home long after the audience has got the meaning.

The choreography suffers from being subjected to a gay back-story, the sufferings of the author Hans Christian Andersen as a beautiful youth whom he loves chooses someone else. The strengths and weaknesses of the music, composed in the dramballet mode of Kachaturian, Gliere, and Shostakovich, uses the Soviet melodramatic idiom in the service of gay liberation. The young Russian-American composer Lera Auerbach, born under the Soviets in Siberia but educated abroad, at Juilliard and in Hannover, uses an idiom almost as ugly as that of "Spartacus," which was composed under the dictates of Communist Party apparatchiks to further the propaganda aims of the Soviet regime. Fifteen years ago, the music was serviceable. 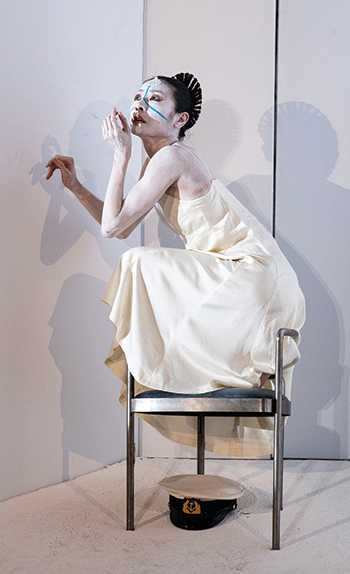 But the Little Mermaid has suffered the fate of Uncle Tom's Cabin, in that the liberation they sought has been brought about. The rhetoric strove valiantly, but now that the laws have changed, what was once a powerful incentive towards feeling moved to fight for change has become an embarrassment, and the little mermaid's sufferings as she tries to get the Prince she has rescued from drowning, whom she loves to distraction, have become an embarrassment as her story comes to look like that of an obsessive stalker determined to make her beloved respond to her when, in fact, he loves someone else.

The audience seems to love the ballet no matter what. As the curtain fell, several in the audience rose to stand before it even rose again. By the time the heroine, our magnificent ballerina Yuan Yuan Tan, came forth to receive her accolades, the entire floor of the opera house was standing. By the end, all had been swept up in the homage to YYT's magnificent performance — and indeed, in homage to all the dancers, who had committed themselves to this dubious enterprise with a full measure of devotion.

Though the choreography is decorative and never builds to a rhythmic power that carries conviction, it is always appropriate to the drama. Neumeier has created the entire look of the show — the costumes, the lighting, the look of underwater life, the astonishing transitions from the ocean floor to the beach. They are amazing. But it's still the same old story. The young prince comes back to life after being rescued by the mermaid who's fallen in love with him and undergone magical and horrifying transfiguration into a creature with legs whose every step will be like knives piercing her body. Her sufferings are unbearable to see, and we see them on and on.

In 2010, five years before the Supreme Court made gay marriage legal, many of us hoped for it but none could take it for granted. But in a couple of years, the subliminal emotions just under the surface have lost their urgency, and the support they provided to the melodrama have lost their force. The piece remains a historical document, but it no longer pushes us forward.

The dancers were, across the board, committed to their roles and performed superbly. First among equals after Tan was Ulrik Birkkjaer, as Andersen, whose fevered imaginings form the substance of the ballet in the wake of his rejection by the young male dancer whom he loved. His feelings become personified in the mermaid, and that's the fountainhead of the story. Next, Aaron Robison as the Prince she rescues and loves desperately, who has some pity for her but no real passion. Sasha de Sola, the convent-girl he loves and marries, was perfect in the role. The high-society folk in their wonderful ball-gowns, the sailors cavorting to Shostakovich-esque sardonic polkas, the underwater sprites, and the shadows who lift and transport Tan as the mermaid in her underwater undulations, as if they were the "invisible" porteurs of the dolls in Bunrakuy puppet theater, were all outstanding in their roles.

"The Little Mermaid" is now a period piece, a curiosity, and a fabulous vehicle for its performers, but the need for it has passed.