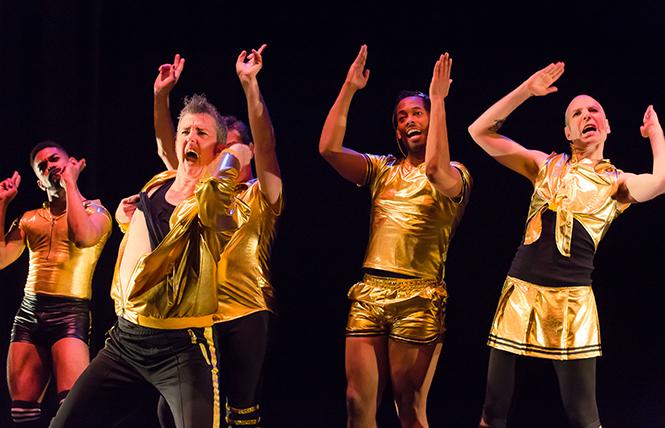 Sean Dorsey Dance will be performing "Boys in Trouble" at Z Space from March 14-16, a show that celebrates the acclaimed company's 15th anniversary of dance performances. Sean Dorsey Dance has attracted a great deal of attention over the years not only because of the company's groundbreaking work, but also because they are the first queer dance troupe founded and choreographed by a transgender dancer.

Dorsey, 46, recalls loving dance, storytelling, theater and music for as long as he can remember. He also recalls, as a trans and queer person, never seeing anyone who looked like him anywhere in dance.

"Me and my community were completely erased and absent from dance," he said. "So when I began making work, a central part of my artistic journey was to insert and assert the worth, value and beauty of trans, gender-non-conforming and queer bodies, stories and voices into the dance world."

In addition to his work as a dancer and choreographer, Dorsey has enjoyed a long history as an activist, fighting for social justice causes. He has gone to coalition meetings, blocked traffic, and lobbied at City Hall about community housing and anti-racism organizing. He's also a member of the trans advisory committee for San Francisco's Office for Transgender Initiatives, the nation's first office for advising a city and a mayor's office on trans and gender-non-conforming policy.

Dorsey has also worked towards creating space for other trans, gender-non-conforming and queer artists. To that end he founded Fresh Meat Productions 17 years ago, which organizes a variety of year-round events, education programs, community engagement, free community forums and workshops.

"The work is a commentary on contemporary American masculinity, especially the idea of unpacking toxic masculinity," he said. "The show is divided into 22 sections. Each section puts a trans and queer lens onto intersectional questions of transgender embodiment, violence, whiteness, black queer love, body shame, and posturing. The work moves between emotionally intense content to outrageously hilarious content."

Dorsey noted that his audiences come from across the LGBTQ spectrum, and even includes straight allies. "I am so in love with Sean Dorsey Dance audiences," he said. "Our audiences are the most amazing mix of humans and communities that you rarely see sitting side-by-side. We have the entire rainbow spectrum of LGBTQ. We have young, trans, straight, and mainstream couples who love dance and have been following our work for years. The spectrum across age, generations and all communities is so astounding, and that's an important impact of the work. We bring disparate communities who are often disconnected together to witness and experience something collectively."

After each performance, the audience is invited to a reception with the dancers. When they perform at Z Space this weekend, the reception will include music by DJ La Frida, who will be spinning in the Z Space lobby before and after each show, and during intermission. Saturday's 4 p.m. performance will include ASL interpretation, and the 8 p.m. show that evening will include a champagne toast with Dorsey in celebration of the company's 15th anniversary.

"I want audiences to come and experience a sense of resonance and relating to us on stage," Dorsey said. "What I love about this work is that there's a palpable heart connection among the performers on stage and audience members. I hope that audiences will leave transformed by the work in some way, that there's something set in motion in them that sets them towards healing, whether it's after their own experiences of toxic masculinity or violence, or the brutal peer pressure that all of us queers put on each other."