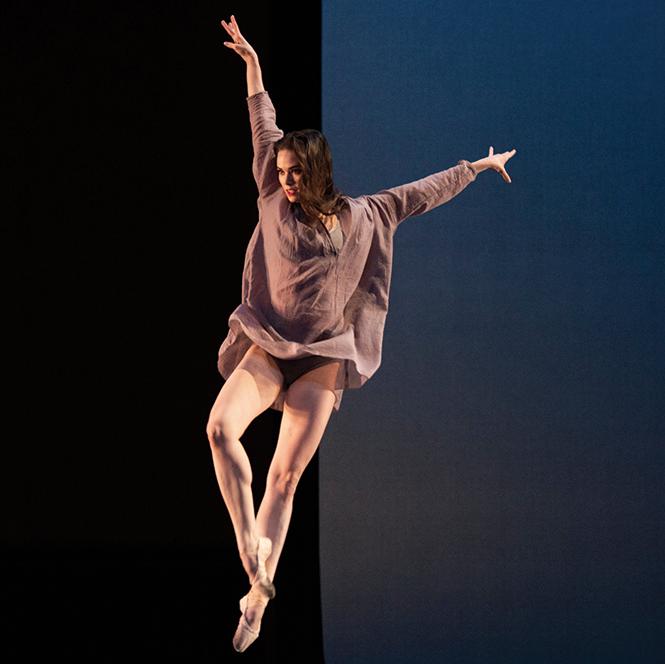 San Francisco Ballet's second and third programs opened during the rains of last week and made many people glad they'd braved the downpours. The dancing was so thrilling, you came away with a kinesthetic high that sharpened the senses. Each show is a triple bill; Program 2 had one boffo hit, and Program 3 had two, which is a very good average for ballet.

We're at the beginning of the run, which goes through Sun., Feb. 24, so what seems like big news now may change as more of the younger dancers come to the fore, but already the highlights have come from corps and soloists. The most beautiful sight I've seen so far this year was Max Cauthorn (soloist) in Balanchine's "Divertimento #15." He's a local boy, good-looking in a sort of quarterback-ish way, but his dancing was beyond good-looking, it was Dresden-statuette perfection in epaulement, ballon, line, action, intention. In flight, he's like a three-point basket. You can tell from when he leaves the ground where he's going and that he's going to whiff through the net. Just the right effort, just the right shape, miraculously coordinated. When he'd alight from a jump, his position was perfect, the stillness complete: alert, but still as a deer. It just looked like pure fun.

He was not the only one. Corps dancers Solomon Golding (what elevation!), Ellen Rose Hummel, Madison Keesler glowed as if they had their own spotlights; soloists Isabella de Vivo, Benjamin Freemantle, Wona Park, Elizabeth Powell, Henry Sidford, Hansuke Yamamoto had clarity of outline as if drawn by Andy Warhol in the shows I saw Thurs. & Fri. nights. They held their own against principal dancers who are long audience favorites, who were themselves dancing beautifully.

The principal dancers I saw who did truly heroic things were Ulrik Birkkjaer, Angelo Greco, Joseph Walsh, and Sasha de Sola, who took the MVP trophies in very different ways. De Sola, who can do anything but dances with such modesty you think of Audrey Hepburn, took the bravura ballet "Etudes" over the top with her witty, "I'm just doing this because I like to" charm, when every step she was doing came from the hard book. Indeed, Harald Lander made this ballet in 1948 for the Royal Danish Ballet to demonstrate the solid base of their technique and the quiet personal grace with which they behave onstage. From the simplest moves up to the tip-top, gut-wrenching, hardest moves ever, it's always "We hope you like it." 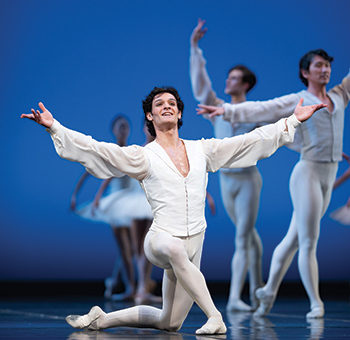 Like it we did. Our audience can dance; I'd wager over half the women have had a few years of ballet at least; and we went berserk. From the bottom to the top, the hierarchical difficulty of steps was met with mastery. The curtain goes up on dancers in the dark at the barre, and the lights pick out a few legs where they're pointing the feet; more lights pick up another set of legs pawing the stage, and it builds from there, with hilarious intricacy pitting slicing action against circling moves, "and so on." Our ability to predict what they might do next is met with wit and surprises. Once they start turning, it becomes a display of the base level of competence expected of the apprentice, and she steps out and crosses half the stage in perfect slow-mo chaine turns before being joined by another who does exactly the same thing. The sequence is finished by the ballerina — de Sola, of course, who does her specialty, chaine turns that speed up til they're blur-spins. Then she stops on a dime and holds an arabesque forever. They proceed through all the exciting versions of turning leaps, showing how easy it is for them to leap right at each other without accident, injury, or signs of nervousness. Then Joseph Walsh and Angelo Greco enter and show you something really difficult and exciting: they jump high, clap their legs together and change direction in mid-air. Greco is smiling the whole time, and Walsh displays a cat-like smile that says he's not going to pander to the audience, but he sticks his landings and looks calm as George Washington after winning a battle.

This may sound like a crude display of bravura, but it's set to brilliantly subversive music by Knudage Riisager, who orchestrated the piano études of Carl Czerny. There's a slight cat-like smile to the whole ballet, and our dancers got the whole spirit of it. It's deeply akin to kids doing 720s on skateboards or dancing on pointe in sneakers. It's something kids like to do, and even if it's in a technique that goes back to Louis XIV, it's cool to do it. Absolutely stellar performance of this ballet, which is the main reason to see Program 3.

But the other reason to see it is Ulrik Birkkjaer, who so far as I can see is the reigning genius of the company at the moment. He was the star of "Snowblind" (Prog. 3), though nobody else Thursday rose to the dramatic challenges of that ballet, and also of the thrilling "Appassionata," a "setting" of Beethoven's eponymous piano Sonata, #23 in F minor, on Program 2. Birkkjaer comes to us as a fully mature dancer in the heroic mode from the Royal Danish Ballet, and he has every gift, especially the power to project emotion, usually called "acting." He can create a character, make you identify with him, hurry away your soul. In "Appassionata" (by Benjamin Millepied for the Paris Opera Ballet), Birkkjaer makes entrances and exits more important than pirouettes. He makes the normally commanding ballerina Dores André blanche and turn pale when he hurtles onto the scene, and flee in the midst of a pregnant pause in the music, when the pianist reaches the end of a tremendous climax. He rushes offstage after her as if his life depended upon it, whereupon the pianist begins again. In short, he makes pirouettes, jumps, slides across the stage, falls to the floor, all the turbulent "moves" dancers do become, as Hamlet says, "words, words words."

It's not that the steps don't matter. There are three couples, but the other two are eclipsed on the stage compared to the drama Birkkjaer brings out from Millepied's propulsive choreography. I urge you to see it and see what you think. The other dancers who were excellent, all of them, were Jaime Garcia Castillo, Sasha de Sola, Elizabeth Powell, and Benjamin Freemantle.

The Balanchine/Mozart "Divertimento" remains the great piece on the shows; it is one of the finest dances ever created in the U.S. Outstanding in it were Wona Park, Walsh, Yamamoto, Cauthorn, and de Sola. All danced well; I want desperately to see it again.

Last on that show was "Hurry up, We're Dreaming," Justin Peck's fantasia on club dancing and the way we live now. Isabella Devivo stood out from the crowd, as did Cavan Conley, Henry Sidford, and Wei Wang. I would wear those clothes.