BARchive: The Golden Age of Hustlers 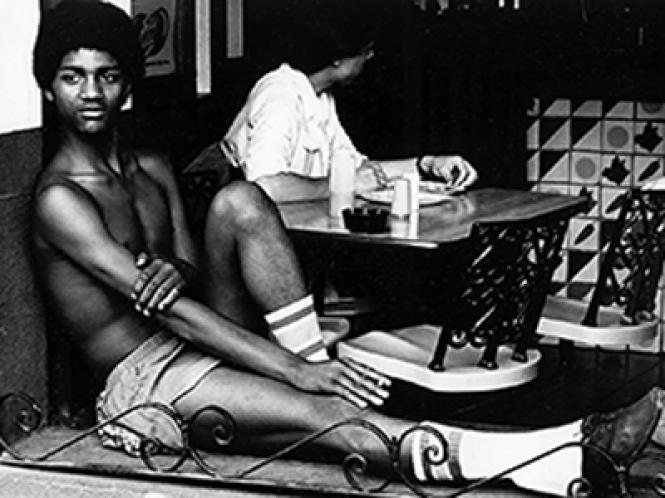 A young man in the window of Nito Burrito, circa late 1970s, from Blaine Dixon's book Polk Gulch  (Source:Blaine Dixon)

"When the bridal parties started coming in, the hustlers disappeared."

It was an offhand comment that Joe Mattheisen, manager of Aunt Charlie's made when I was working on an article about the bar. What about the history of hustlers in town?

Joe was right, of course. When I first started coming to the bar in the late 1990s, there were indeed hustlers there. Now they were nowhere to be found (at least on the street). How did we get to this point?

Male prostitution is probably as old as the city itself. Edward Prime-Stevenson wrote in 1908 that soldiers in the Presidio were for rent during the Spanish-American War. It is certainly as old as the homophile organizations.

In April, 1959 the Mattachine Review ran a story, "The Hustlers: Exactly How Tough Are They," which told the story of Jimmy Sheldon. Jimmy is out of work, out of an apartment and finds himself in Pershing Square and adopted by a family of hustlers (who, predictably, have hearts of gold).

The 1960s were both a better and a rougher time. In 1965, Vanguard formed with the help of Glide Memorial Church. It was the first organization to advocate for the rights of hustlers. They published a magazine and engaged in political actions. In a July 20, 1966 San Francisco Chronicle column, Herb Caen noted a protest.

"Compton's, the all night cafeteria at Turk and Taylor, is now being picketed by some of the weirdniks who've been rousted by the tough Pinkertons on duty there. If you've never dug the Tenderloin types who generally hang out there after midnight, you're missing one of the Sights of the City. Positively eerie."

Shortly after the protests, Vanguard held an open forum with Guy Strait, who published Strait's Citizen News. Strait represented both the best and worst attitudes toward hustlers. He was open and willing to talk with them, but he also exploited them, filming them for tape loops. Strait would wind up in prison in Illinois in 1976 for underage pornography.

The first arrests in San Francisco specifically targeted at male prostitutes happened in the '60s as well. On Dec. 13, 1968, the Chronicle ran an article, "First Male Prostitutes Jailed in S.F.," which noted that six men had been picked up in a sweep of the Tenderloin. Edward Nevin of the Vice Squad noted, "Now the word is out that we mean business."

Perhaps it was the police raids that caused a change, or perhaps it was just another business opportunity, but beginning in May 1970 in Vector magazine and starting on May 15, 1971 in the Bay Area Reporter, modeling agencies began advertising with "24 hour service."

Dial-A-Model, J. Brian Models and Richard Elmon all had ads with pictures in the papers. Within two years the police began busting the modeling agencies.

On February 12, 1972 a Chronicle headline announced "Mass Arrests of Homosexuals." The Scott Grant Agency, J. Brian's Models and Dial-A-Model were all raided and David Hurles was raided as well. Later in the year, on November 6 and 7, the Universal Model Agency and Toby Ross' Ivan Sterling Agency were raided as well.

Raids continued periodically through the '70s. Richard Elmon was arrested in 1979, eventually winning his case on appeal.

In Gay Pioneers: How Drummer Shaped Gay Popular Culture 1965-1999 Jack Fritscher (of Drummer fame) notes that Hurles photographed, "hyper-masculine, young American men who were hustlers and ex-cons from Polk Street, Union Square, the Transbay Bus Terminal, the Zee Hotel at 141 Eddy which was the hustler hotel of the Tenderloin, and the Old Crow hustler bar at 926 Market Street."

Regarding Hurles' work, Fritscher coined the phrase "Terror is my only hardon," implying such trade hustlers as possibly violent.

Hurles did not, however, run a modeling agency (as the Chronicle article implied). All of his models were independent agents. Perhaps his concern for the people he worked with comes from his personal experiences as a model, which he did before becoming a photographer.

Fritscher further discusses both Hurles and the callboy services of the time in his just-released book, California Dreamin, West Coast Directors and the Golden Age of Forbidden Gay Movies.

Two other developments happened regarding hustling in the 1970s. There was a blossoming of classified ads in gay publications and both Polk Street and the Tenderloin became fixed destinations for male prostitution in the minds of gay men in San Francisco.

Empress Marlena told me much the same, "Bob Ross used to say that the last five or six pages (the ads) paid for the rest of the paper."

Marlena also said (regarding Polk Street), "There really weren't hustler bars as such. The neighborhood was a hustler neighborhood and the hustlers were patrons there."

Although bars like the QT (1695 Polk), Reflections (1160 Polk), the New Bell (1203 Polk) and The Wooden Horse (622 Polk) were thought of as hustler bars, they were simply bars that hustlers patronized.

For specialized bars like The Motherlode (1002 Post), Empress Alexis Miranda had another clue for me regarding hustling and drag.

"When you put on a dress, you become female to them," said Miranda. "And that makes them straight."

This explains why not all of the johns on Polk Street considered themselves gay.

The 1980s brought conflict between Polk Street merchants and the hustlers. In August and September, 1981, a massive police sweep resulted in more than 470 people arrested. Most charges were dropped, eventually only three people were prosecuted. Blaine Dixon's book Polk Gulch documents the period just prior to the sweeps.

This were also a period of a series of murders in the Polk. Donald Spottiswood picked up Ralph Murray at the Gangway on Nov. 26, 1984 and was stabbed by his trick multiple times.

Hustlers were no safer than their johns. Larry Gaines (18) and Ted Gomez (15) were taken from Polk Street to Land's End and killed in what became known as The Land's End Murders.

Between violence, AIDS and hostility from merchants, the Polk district began to see fewer the hustlers in the '90s. When the internet came into popular use, sites like Craigslist and Rentboy.com made street hustling obsolete by the turn of the century.

The era of the street hustler has, for the most part, passed. But for those who were here in that era, the vibrant memories of lively street life remain.