Art as a cause: John R. Killacky's book of essays 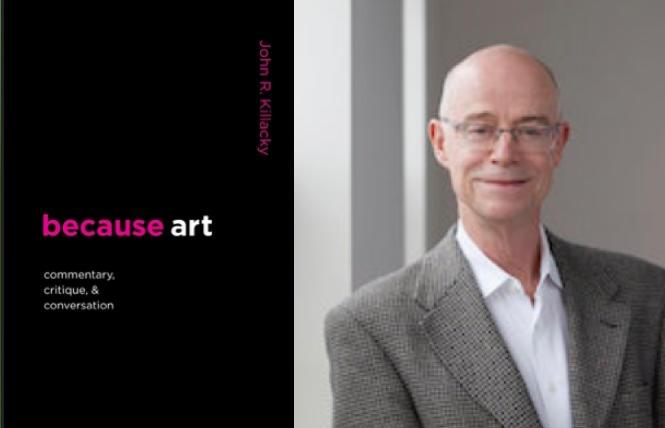 He's been a dancer, an arts administrator at the center of a government censorship controversy, and is a gay man dealing with a serious disability. Local arts professionals and patrons know John R. Killacky from his work as executive director of Yerba Buena Center for the Arts.

In his concise collection of essays and interviews, Killacky's because art: Commentary, Critique & Conversation (Onion River Press) offers behind-the-scenes perspectives on his decades of arts administration, and his own struggle to deal with physical limitations.

His insight on the successes and failures of arts funding, and government censorship at the height of the 'NEA Four' and Robert Mapplethorpe controversies, provide a look back at the ups and downs of funding efforts to support the arts.

Killacky's opening essay, "Called to Serve" condenses decades of his arts and personal accomplishments, from dancing with Chicago Moving Company to finding enlightenment in the Himalayan mountains with Buddhist monks.

His return to the performing arts included managing post-modern icons Trisha Brown and Laura Dean's dance companies for a few years, all at the center of New York's performing arts explosion, until he was recruited as performing arts curator for the Minneapolis Walker Art Center. through these years, Killacky also wrote, made films, and enjoyed a hobby of horse-cart-riding.

His perspectives on censorship, as a producer of events under the Inquisition-esque rightwing, offer unique insight. Controversies continued, specifically with media distortions (and lies) about the work of Ron Athey. The 'Culture Wars' raged on, but Killacky's own battles took on a new challenge when a spinal cord tumor led to an operation that left him paralyzed. His lengthy and painful partial recovery was aided by the use of a mirror, since, he writes, "I learned to dance with mirrors."

With most originally published elsewhere (including the Bay Area Reporter; see this week's arts '50 years in 50 weeks'), some of the essays read more like arts conference addresses, and they are. But Killacky counters the more formal writings with personal insights into his continued journey of being disabled.

One of the results of his journey was Queer Crips: Disabled Gay Men and Their Stories, a groundbreaking Lambda Literary Award-winning anthology Killacky co-edited with Bob Guter.

Q&As with several notable creators (Bill T. Jones, Tim Miller, Janis Ian, Judith Smith, Tony Kushner and more) make for insightful reading for anyone in the arts, and those interested in how art gets made.

Printed in clear sans-serif fonts —which usually don't work well, but do in this case— the book itself takes on the refined quality of a contemporary exhibit catalog.

Like a sort of arts Doctor Who, the author continues to renew and regenerate. Now serving a second term as a legislator in Vermont, Killacky recently retired from his position as executive director of Burlington, Vermont's Flynn Center for the Performing Arts. This news, and a few mentions of COVID-19, make for a collection of writings that are both historically important and up to date.