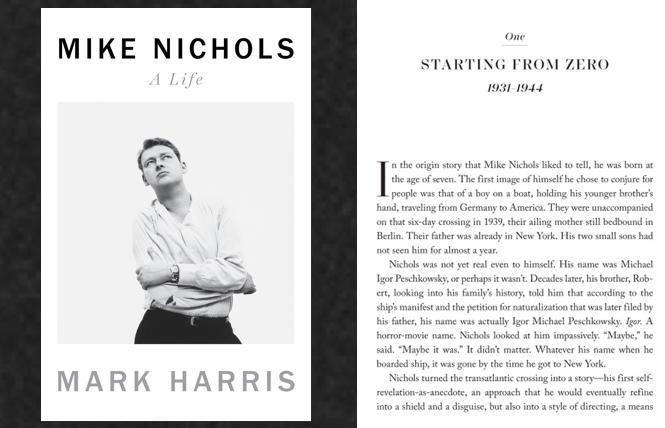 The Graduate is a milestone film (the third highest grossing movie ever) for Baby Boomers, who felt for the first time that Hollywood understood their generation and what it was striving to achieve. Directed by the older, non-American-born Mike Nichols, this is one of many ironies catalogued in a new exciting towering biography of a protean creative force in theater and film, replete with dazzling triumphs and crushing failures.

Written by Mark Harris, the husband of gay playwright Tony Kushner (Angels in America), but more importantly a highly respected popular cinema historian (Pictures at a Revolution; Five Came Back), Mike Nichols profiles a prickly genius who was a virtuoso observer of others, yet a stranger to himself.

Harris became a friend of Nichols in his final decade, which could be a liability when penning a life history. Given carte blanche by Nichols' family and friends with no subject off limits, he manages to etch a bitingly blunt but laudatory moving portrait of this complicated, charismatic, and colossal figure.

An outsider from birth, Nichols was born Igor Peschkowsky to a Russian Jewish Berlin couple in 1931. His father was a doctor and his mother an affluent neurotic cousin of Albert Einstein. At age 4, he suffered an allergic reaction to a whooping cough vaccine that left him bald and hairless for the rest of his life. At age 7, along with his younger brother, they were sent alone aboard ship to America, to flee the enfolding Nazi terror. 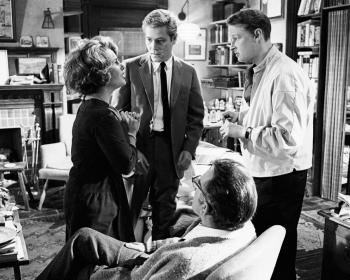 Mike Nichols (Rt.) on the set of the film adaptation of 'Who's Afraid of Virginia Woolf?'

Bullied at school and describing himself as a zero and powerless, Nichols also had to contend with parents who fought bitterly, each having their own affairs. Nichols' father died of leukemia when he was 13, leaving his overwhelmed family impoverished.

In a later conversation with Harris, Nichols connected why he became a director: "If you're missing your father, as I had all through my adolescence, there's something about playing the role of a father that's very reassuring. I had found a process that allowed me to be my father and the group's father."

Nichols attended the University of Chicago where he blossomed, as his sophisticated often bitchy self-taught intellect and spellbinding stories made him popular, enabling him to discover his gift for making friends (i.e. Susan Sonntag). He would meet two key people: Paul Sills, the future founder of Second City, who introduced him to theater as a vocation, and Elaine May, a similarly sharp-tongued autodidactic and adroit performer.

Nichols and May had a brief fling that fizzled, but they became an improvisational comic team known for their literate satire subtly critiquing 1950s conformity. The duo's sizzling chemistry led to nightclub and TV appearances, best-selling LP records, and an acclaimed Broadway show. 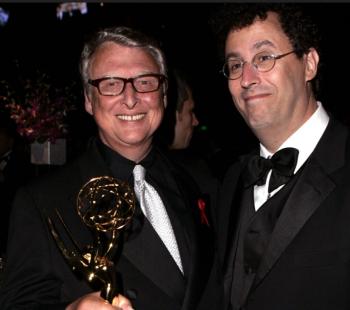 Mike Nichols with Tony Kushner at the Emmys when 'Angels in America' won.

Harris notes, "They brought something slyer, sharper, and wholly new —a comedy rooted in deep observation of the tics, vulnerabilities, insecurities, vanities, and pretensions of others, and of themselves."

They formally split in 1961 but remained friends, working together intermittently through the years.

Stages
At a crossroads, Nichols became a director of hit Broadway comedies, notably Neil Simon's Barefoot in the Park and The Odd Couple, but later made memorable forays into cutting dramas like Streamers, The Real Thing, The Gin Game, and Betrayal, eventually winning eight Tony awards.

He became wealthy and traveled in high social circles, accumulating friends like Jackie Kennedy, photographer Richard Avedon (who taught him the art of hobnobbing with the rich), Gloria Steinhem (a romance), William Paley and Leonard Bernstein among many others. He had to work continually to support his lavish lifestyle featuring palatial mansions (hosting illustrious houseguests), owning/breeding Arabian horses, and supporting three ex-wives.

During frequent down periods, he suffered crippling depression and suicidal thoughts, which he self-medicated with heavy drug use, particularly cocaine and Halcion. His role model was Elia Kazan (A Streetcar Named Desire; Death of a Salesman) and similarly, Nichols became an actor's director. He taught by offering self-revelatory anecdotes, providing a safe space to experiment and go to dark places. He always knew what to say (whether charming or brutal) to get the performance he wanted. He could abuse the crew, fire people on a whim, and ridicule people he disliked.

Screens
Due to his theatrical successes, Hollywood came calling and he scored a home run on his debut, Albee's controversial Who's Afraid of Virginia Woolf, which many thought unfilmable. However, Nichols created a masterpiece that helped shatter the Production Code. His second feature was The Graduate, which won him not only an Oscar but immortality. Then came his first failure, the anti-war satire Catch-22, though 1971's sexually provocative Carnal Knowledge rehabilitated his fortunes.

For the rest of his movie career he alternated between hits (Silkwood, Working Girl, the gay Birdcage, Primary Colors, Closer) and flops (The Day of the Dolphin, The Fortune, Regarding Henry, Wolf). He was not an auteur, but sought to tell the story and the truth intelligently. Like Kazan, he was a master of adapting stage plays for screen and had two late career HBO tour de forces, Wit and especially the AIDS fantasia Angels in America. It's fascinating that his biggest critical achievements came towards the beginning and end of his professional life with Virginia Woolf and Angels, both written by gay dramatists. 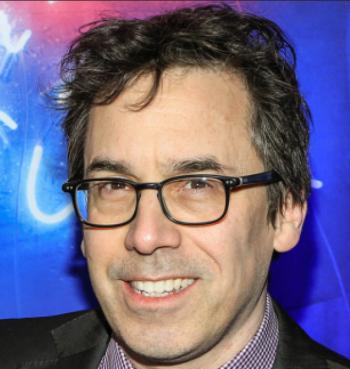 Nichols' tale is ultimately one of redemption, which started with his fourth1988 marriage to TV journalist Diane Sawyer, who provided a safe space for him to confront his demons. Harris notes that the worst stories about Nichols originated from Nichols himself and toward the end of his life (he died of a heart attack in 2014) he admitted his many mistakes and boorish behavior.

In the 2017 Avedon biography, Something Personal, Avedon former assistant Norma Stevens asserted that the primarily gay Avedon had told her that he and Nichols had a 10-year romantic relationship. There were rumors of Nichols' bisexuality throughout his life.

Harris says it's quite possible they did have an affair, but there's no evidence of a long sexual relationship, nor did he find any confirmable information about Nichols' history with men. Regardless, the numerous gay-themed films Nichols made and his own role as the vulnerable tormented outsider render him of vital interest to LGBTQ audiences.

Harris provides background material of every play and movie directed by Nichols, which could've been plodding. However, filled with insightful often humorous anecdotes and written in a breezy style almost mimicking Nichols' urbane flair, Harris conveys —meticulously and engrossingly— Nichols' constant motion and extraordinary scope, and articulates a colorful, at times self-destructive, and brilliant innovative artist.

Quite simply, Mike Nichols: A Life is one of the best entertainment biographies in years.

Screen times: Film coverage in the B.A.R. through 50 years, part 2