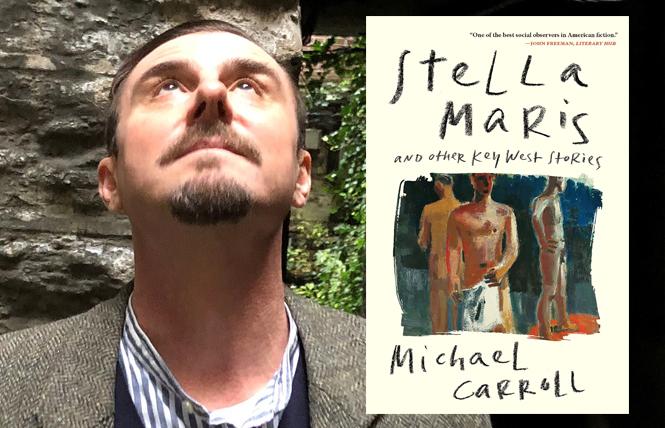 In a recent interview the master of the American short story (I'm not naming names) said there should be no reason to read the stories in a collection sequentially. The observation bore in on me as I read my way sequentially through Michael Carroll's new short story collection, "Stella Maris and Other Key West Stories" (Turtle Point Press).

It felt like making it out of the swamps to terra firma when I reached "Key West Funeral," third from last of the collection's eight stories. The story is as mercurial as the others, but its meander among the consciousness of its characters coheres, if in the way a cyclone does. Despite his stated intentions to the contrary, Carroll's writing in these stories is exhibitionist. Perhaps because by then I was trained, I was moved by the story as much as by its author's manifest skills as storyteller.

Key West is to these stories what Houston is to Bryan Washington's "Lot." The stories are interwoven and characters interact across them in a way that creates a world even for those who have never visited these places. Carroll gives a more kaleidoscopic view of the gay getaway on the other side of the Gulf, with more frequent changes of reference both within stories and among them. Most of the changes are whiplash, leaving the reader to make transitions or just hold on for the ride.

The gang all there for the beachside funeral celebrating the life, and glossing over the suicide, of Douglas Harlan, known to some only as the drag queen Cherry de Vine, includes a stable of principal players and a gallery of walk-bys who pause to wonder and walk-ins who stay to drink. Carroll tips his authorial hat by beginning the second sentence with the words, "Dead Douglas."

The celebrant, Father Bill, is one of Carroll's most sympathetic characters, a kindly drunk right out of Malcolm Lowry who observes the lives of others, viewing them compassionately through the bottom of a glass. Before the wake has run its hallucinatory course, Dead Douglas had also earned our sympathies, and Sandrine, an alcohol-abstinent French ex-pat caterer extraordinaire who "rarely was seen snacking or doing anything else with food but arranging it," our admiration.

Nearly to a one, the characters spark a wince of recognition, and the closety men and straight women get particularly harsh scrutiny. The few, always young, gay characters with consistently held and acted-upon values, not to say innocence, are depicted as those whose time in gay hell has merely not yet come.

The value of reading the stories sequentially is that Carroll invokes the sense of psychic fracture from the opening lines of the first story, "Sugar and Gold," where "four cuties, naked by the pool except for their striped towels," sit around the pool and hot tub, drinking and complaining. That fact that the scene is all-too-familiar does not make their conversation any easier to follow. No one's ennobled by the goings-on, including "an older guy at the bar with his back to them."

"Stella Maris" is no country for old men, at least if they're looking for meaning in what remains of their lives, or even consolation. The cuties profit from their parodied vacuity, but the dead, of whom Douglas is only one, are less painful to watch than the aging, middle-aged, and decrepit old, a largely unsavory bunch of wannabe artists, failed writers and other left-overs depicted in prose with the writhing grotesquery of Hieronymus Bosch.

Nothing like "The Divine Comedy" will come out of this boozy hell, sketched with a poisoned pen. Whether your taste in gay self-hatred runs toward the sour or the bitter, Carroll's got you covered.

Few readers will come to this book unaware that Carroll is the husband of Edmund White, both committed enthusiasts of their open relationship. In the final story, "The Book about Perry," characters who bear noteworthy resemblance to both take center stage in a bleak drama about the perils of aging and the bittersweet nature of the mentor-mentee relationship. Carroll's line about an earlier couple serves here: "Their lives together were couplets, a good line being just everything."

These stories are as complex as they are bluntly profane. Sex is everywhere, but you only watch it once. Characters bob in and out like specters, and time is as bent as it is cruel. While he never lets you forget his authorial agility, Carroll stints on transitions and is so promiscuous with pronouns and their antecedents that keeping up requires a discipline from the reader not a single character evinces. Any impetus to stop and figure it out is dulled by the author's hints that it is all, to steal a phrase from "Key West Funeral," "more of a feathery sideswipe."