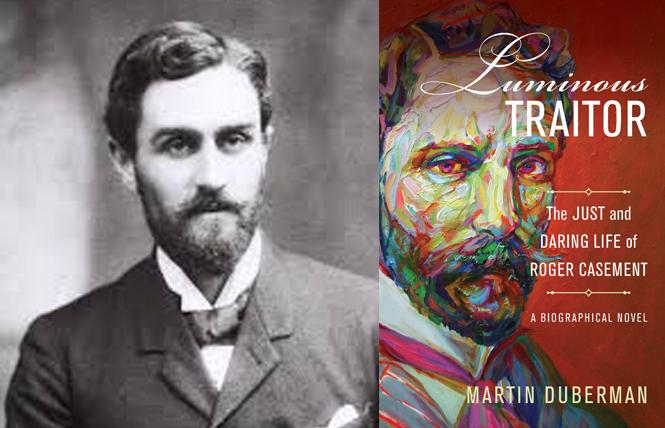 Seasoned gay historian Martin Duberman showed the value of historical fiction in his ambitious novel "Jew Queers Germans" of 2017, when a host of new "nonfiction" writing, some by Duberman, about the era in which the word "homosexual" was coined appeared. The novel brought the struggle for liberation to life. With "Luminous Traitor: The Just and Daring Life of Roger Casement" (UC Press), he has narrowed the focus to a deeply informed biographical novel, skillfully told in present tense, that brings another, even lesser-known historical era and its principal actors to light.

Before I lose you, consider the final sentences of Duberman's concluding Author's Note. After properly acknowledging the important work of historians before him, he criticizes two recent biographies that "do discuss Casement's homosexuality, and their tone is not censorious," he writes. "Yet both do seem uncomfortable with the extent of his promiscuity, minimizing or gently disparaging it, as well as (to a lesser extent) his rejection of monogamy and coupledom — thereby skirting certain essential ingredients in Casement's startling contemporary posture."

If you know anything about Roger Casement it may be about the rampant sex life he chronicled in his private "Black Diaries," which listed the trysts with the prodigality of John Rechy's "Numbers," only with more apparent joy and fulfillment. It is a truth universally acknowledged that there's sex that makes one or other(s) of the partners feel bad, and sex that perks up everyone's day. Casement's was more of the binge than the compulsive type, so however arcane the diary entry we're provided, mentally filling it out is both a pleasure and a reminder to writers that readers like to use their imaginations, too.

Ultimately, it was the calculated leaks of "Black Diaries," deliberately lewd crypto-crosswords, that got Casement a bug-ridden, celibate staycation in the Tower of London, and after a four-day trial for treason, hanged. But his advocates, including John Galsworthy, G.K. Chesterton and George Bernard Shaw, and the parts of his story in which he remained clad, testify to a daring man whose primary, life-long concerns were freedom for all and the end of oppression of the powerless poor.

His first major posting, to Africa, quickly led the adventurer in Casement to the discovery of the brutal exploitation of the native population by the rubber barons in liege to the King Leopold of Belgium. He reported what he saw; it's not for the faint of heart; he didn't want it to be. Back in England, he advocated for a halt to the horrors to a shocked, credulous England inhibited by its own imperial atrocities.

He was reassigned to South America, where again he left his desk to investigate the criminal rubber-harvesting industry there. In the Putamayao, he once again found appalling forms of slavery, forced labor and populace-controlling (and -decimating) violence. And again he reported, advocating for the native population and against the criminal rubber barons, who, in a pattern all-too-familiar, prevailed, the rapidly disappearing rubber trees outlasting the brutalized Indians.

There's some genuine swashbuckling in these episodes of Casement's career, but what stands out in Duberman's telling is the diplomat's fundamental bravery and deep compassion. There were the apparent dangers of the jungle and the more insidious ones of the government halls, and Casement fared better with the former, his hot-headed frustration a key factor in sieges of bad health.

On his final posting, to his native Ireland, he witnessed poverty as grinding as any he had seen in the Congo and the Amazon, and his own people not merely neglected by their British overlords but tortured by them with starvation. The complex story benefits from Duberman's mastery of detail, but Casement became a deep partisan for Irish independence. Getting caught up in a failed but daredevil attempt to import German weapons to Ireland for the Easter Uprising of 1916 led to his hanging. There's some sentimentality in the long but ultimately successful attempt by the Irish to retrieve his bones from the prison grounds and repatriate them to Dublin.

The accounts of Casement's sex life are thoroughly integrated in Duberman's telling, which he rightly suspects will find some sympathetic modern ears. Casement's work for the oppressed was determinant, his extracurricular love of sex as much a matter of his arrestingly good looks, appealing personality and personal tenderness and the norms of the sexual libertines of his time. Others have seen imperialism in his sexual dealings, but they were hardly restricted to poor, powerless natives, and when money did change hands, it was as often because Casement knew the difference it would make in the lives of his partners. Fiery in his convictions and tender in his relations overall, Casement was a voracious bottom with a taste for big dicks and deep penetration — despite a life-long susceptibility to hemorrhoids and anal fistulas. His diary entries suggest that, sexually, a good time was had by all. Casement's was a versatile, multi-faceted heroism.