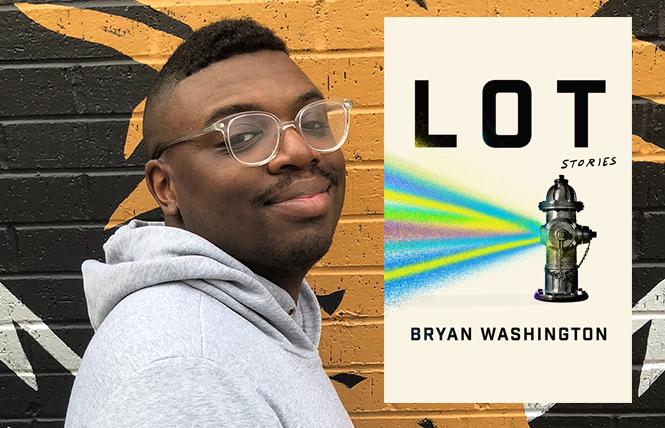 Somewhere in the scores of pre-publication interviews he did for his debut short story collection "Lot" (Riverhead), Bryan Washington said that some of the best advice he got about writing was: "Relax. The reader can tell when you're tense." The idea is a perfect descriptor of Washington's writing in these stories, and the source of its cumulative power. It's loose and easy, conversational, vernacular, curbside fabulist, street-language spiked, strikingly original and, before you know it, transfixing. As much as you savor the stories' skillfully concealed craft and form, you don't want them to end.

The stories are free-standing but cycle around the family fable of first-person narrator Nic (Nicolas), whose name is revealed grudgingly — "That's my fucking name" — only in the last section of the final story, "Elgin." "Lot" is also the story of real estate, a city, the largely post-Harvey Houston, whose precincts we never leave farther than the Galveston shore. When, at the end, Nic's feet sink into the "muddy sand ... sweaty with plastic and bottles and shit" there, his is only the most tenuous escape, with freedom on the far horizon, possibly a mirage.

This is "Dubliners" as imagined by Faulkner and haunted with the ghosts of its steadily vanishing citizens as if they were swept up by ICE. "East End in the evening is a bottle of noise," Washington writes. "Houston is molting. The city sheds all over the concrete."

Even pre-Harvey, gentrification is encroaching, but the "blancos" are little more than apparitions in these tales of the permanent if ever-migrant underclass, mostly people of color(s) for which Washington has a varied, vivid chart. Most of Nic's mixed-race kin inherit his African-American mother's dark skin, "like rust on the rim of the stove."

Nic is gay. In a wrenching catalogue of such post-coital chat as he has had with his tricks (as often as not but far from exclusively "whiteboys") he concludes, "Mostly that's how it goes. A half-story and they're out. I don't know what happens to these people or where the hell they end up afterwards."

Probably, on evidence, to some hell of their own making is where. If one thing's true about the lot in "Lot," it's that they're so used to it, tragedy has long worn off their flip-flops, without sentimentality or self-pity, if not without a saving humor. Nic's Ma says it's "cyclical ... you have things and then you don't."

Like island people — which many of them are, from outposts in the Caribbean and Central America — they are, if not obsessed, preoccupied with what's the haps on the mainland, fantasy realms where not everyone is poor. They're transient yet not going anywhere, even when opportunity beckons. What they're more accustomed to are its knocks.

In "Waugh," "Poke lived in a room with five boys and a window." He's in a gaggle of male hustlers with nicknames like Scratch and Nacho. They're mothered by a man named Rod, who promises to bounce them if they contract HIV, then himself does, keeping it on the downlow while passing it on, to the outrage of his tenant kids.

Though regular johns are their staples, these are not youngsters hungry for stability. "Even worse were the ones who popped the question: could you live with them. The ones who swore they'd take care of you. All you'd have to do is hang around, take a fucking every now and then. Disappear when they needed you to. Reappear just as suddenly. They'd tell you how much they loved you. [Poke heard them out] because they'd never see him again."

Washington has no use for types: the most minor characters are as sharply drawn as a police sketch. Nor is he inclined to platitudes about the human condition. His people are rooted drifters likely least of all to find themselves elsewhere. It's how it goes with intimates, too. They're far more than "a half-story"; but even with them, Nic's maxim applies: "I don't know what happens to these people or where the hell they end up afterwards."

What Washington knows all about is his characters' insides, or lack thereof, while they're here. What binds them is the slim tendon of what his sugar daddy Emil tells Poke: "I don't know what your friend should do.... I know that when you choose, you choose for everyone."

"Elgin," the story where it all comes together, begins with Nic's reflection: "Once, I slept with a boy.... We met the way you meet anyone in the world and I brought him back to Ma's. He saw the candles by the stairs and the lighters on the counters and the boxes in the kitchen and the cans lining the tile, and when he asked if I was coming or going I said this was just how some people lived."