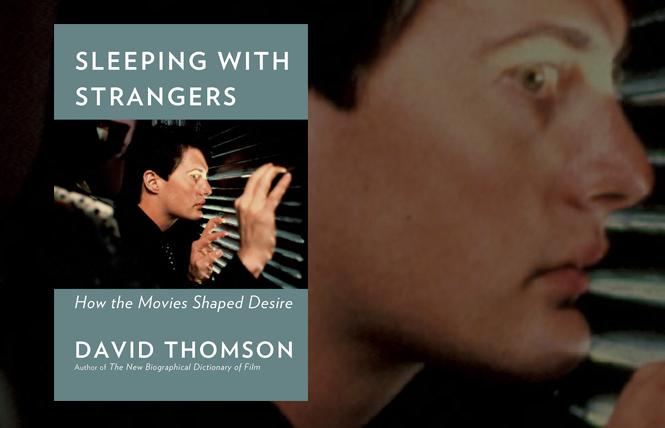 Sleeping with Strangers: How the Movies Shaped Desire by David Thomson; Knopf, $28.95

David Thomson, who lives and teaches in San Francisco, has been called the best writer on film in English, having authored almost 30 books on the subject, from biographies to chronicles about Hollywood. A bit of a maverick, he can't be called a film critic or film historian in the traditional sense. He's more an essayist who marries his own personal opinions of film with his formidable knowledge of the medium. Thus his offbeat themes are rarely stated straightforwardly and must be teased out of the meandering text, which can make reading him laborious, as he can cite three or four references in one sentence to bolster idiosyncratic speculations. "Sleeping with Strangers" is classic Thompson, exhibiting his gifts and liabilities.

Originally, "Sleeping" was slated to be a book about the history of gayness in films, despite Thomson being straight. But during the writing, the #MeToo movement erupted, and Thomson expanded the book to include male privilege and Hollywood female exploitation. The final version feels like two incomplete works sculpted into one. He explores how movies have influenced our ideas about love, how the erotic life of films shapes our own understanding of desire, introducing "the masses to sex as pleasure." Thomson claims movies mold their audience into escape artists (from harsh reality) and voyeurs, as we fall in love with stars who act out fantasies we're often too fearful of pursuing in real life, "sleeping with strangers in our heads," captivating us with the forbidden.

Thomson uses desire as a way of understanding the world, transforming our sense of self and possibility. To his detriment, he conflates trans, bisexuality, kinky straight sexuality, all under the gay banner. So in his introduction he writes, "There's a gayness in this medium that we're never going to shrug off, an attitude that says you can make do with sex — it's great — but don't fall for the whole construct of romance, marriage, being happy, and buying the package." The more apt word to describe this approach is queer, an all-encompassing term for people or concepts outside the heterosexual mainstream. It disrupts binary thinking about gender or sexual identity, constructed through cultural standards that differ according to time and place. To his credit, Thomson asserts straight people need to learn from gay experience, even if it means subverting conventional ideas about romance.

So the book depicts graphic examples of teasing out a gay (but really queer) subtext that always existed in seemingly straight films but remained unnoticed. We read about the gay subculture in the Golden Age of Hollywood, with directors George Cukor and James Whale as prime exemplars, assisted by gossip columnists and the studios when the not-always-straight stars went astray; how Westerns embodied a coded bond between cowboys and their buddies; and how "Bonnie and Clyde" implies Clyde may be gay, but can't admit it outright. We also get profiles and sexual gossip about Rudolph Valentino, costume designer Travis Banton, Jean Harlow, Montgomery Clift, Dirk Bogarde, Katharine Hepburn, Spencer Tracy, Cary Grant, and Rock Hudson. Some of these explorations succeed better than others, but none of them will be buzzworthy to the LGBT reader, who will recognize most of these revelations as old news. Vito Russo's "The Celluloid Closet" made similar observations over 35 years ago, in a more direct and entertaining fashion.

Ultimately, "Sleeping with Strangers," though well-intentioned, is unsatisfying. Thomson comes perilously close to portraying Hollywood in its heyday as a gay mecca, which might've been true for people behind the camera (as long as they didn't provoke scandal) but certainly not for those in front of the lens. He almost glorifies the Production Code, suggesting that censored restraint accentuated desire. This is partially true, but so much was excluded, especially LGBT people and their experiences. Some comments are outright sexist. Thomson alleges that 16-year-old Natalie Wood secured her role in "Rebel Without a Cause" by sleeping with the (bisexual) director Nicholas Ray, justifying statutory rape. He makes a veiled defense of his close friend director James Toback, who sexually harassed or assaulted hundreds of women (which he denies), but "now is on the road back with a new project and has lost 60 pounds." His thesis that the male gaze in the form of lust is the raison d'etre for movies is dubious, with scant content about women's films or female views. There are a few nuggets of wisdom here (i.e., that the men in Martin Scorsese's films are more interested in each other than they are with women), but making the effort to find them is questionable.