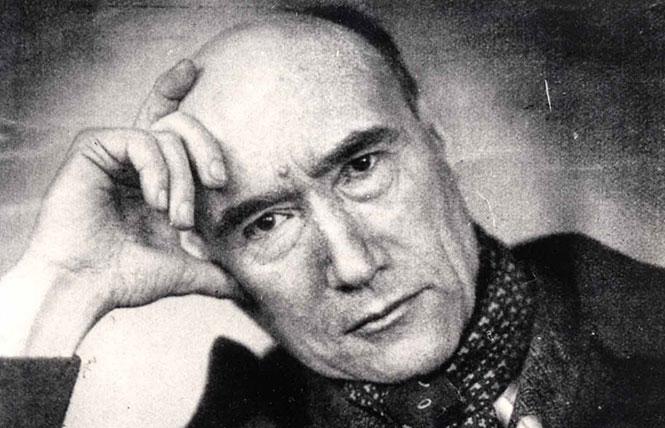 The Swedish Royal Academy's decision to award the 1947 Nobel Prize for Literature to Andre Gide (1869-1951) was revolutionary. Never before had an openly homosexual author been given that prize. Gide was recognized "for his comprehensive and artistically significant writings, in which human problems and conditions have been presented with a fearless love of truth and keen psychological insight."

Gide was not only forthright about his sexual orientation, he also wrote about it candidly. His most important works featured homosexual and bisexual male characters, some of whom were good and moral, some of whom were not. Gide eloquently and logically argued that same-sex physical attraction was natural, and that it should not be condemned by society.

Additionally, Gide distinguished between "sodomites" and "pederasts." The former were men who were sexually attracted to adult males. The latter, in which he included himself, were men drawn to youths: teenage boys.

Andre Paul Guillaume Gide was born in Paris to a Protestant bourgeois family. His father was a university professor, his paternal uncle a well-known economist. Gide was 11 when his father died. He was reared in isolated conditions in Normandy. Perhaps that's why he began writing at an early age, publishing his first novel at age 21.

While traveling in Northern Africa in 1893 & 94, Gide began having sex with Arab youths. In 1895, he met Oscar Wilde in Algiers, and introduced Wilde to local teenagers willing to engage in sex with him. The visits to North Africa (Algeria, Morocco, and Tunisia were then French colonies or protectorates) influenced his 1902 novel, "The Immoralist" ("L'Immoraliste.") To please his father, its central character, Michel, marries Marceline. They honeymoon in Tunis. Michel is stricken with tuberculosis. Marceline moves him to Algeria, and under her care, he recovers. Michel realizes he is attracted to Arab youths. He is also attracted to his estate's caretaker's son. He befriends the flamboyant, rebellious Menaique, and the men spend a night together. Marceline's miscarriage, frail health, and eventual death sadden Michel deeply, but also liberate him to live the life he prefers. The novel was not published in English until 1930.

In 1954, Augustus and Ruth Goetz adapted "The Immoralist" for the stage. Billy Rose produced it on Broadway with Louis Jourdan, Geraldine Page, and James Dean as an Arab boy. (Dean, uncomfortable in the part, quit after the opening-night performance, which director Elia Kazan had seen. Impressed, Kazan offered Dean the lead in the film "East of Eden"(1955), which made him a star.) The play ran about three months.

In 1908, Gide founded the literary magazine "Le Nouvelle Revue Francais," ("The New French Review,") and remained its director until 1914, when publication was interrupted by WWI. Important writers like Anatole France contributed to it. Under subsequent directors, it was the first to publish works by Jean Paul-Sartre and Andre Malraux. The magazine is still in print.

In 1916, 47-year-old Gide took 15-year-old Marc Allegret as his lover. The handsome youth would later catch the eye of Jean Cocteau, whom Gide feared would "corrupt" him. Gide had been married to his cousin, but the marriage was never consummated. In 1923, he had a brief liaison with a woman and fathered a daughter. It apparently was his only heterosexual encounter. It did, however, cause problems with Allegret, who eventually decided he preferred women to men, and became a successful and influential movie director in France.

In the early 1920s, Gide enjoyed the admiration of writers like Albert Camus and Sartre. Marcel Proust corresponded with him and wrote about his own homosexuality. But the 1924 publication of his Socratic dialogues "Corydon," with their passionate and rational defense of homosexuality, earned Gide notoriety. The title came from the shepherd in Virgil's "Ecologues." Corydon suffers from unrequited love from Alexis, a beautiful youth.

Fortunately, unlike the U.K., homosexual sex between consenting adults was not against French law. Thus, Gide was not subject to the legal persecution that destroyed Wilde. Nonetheless, the book garnered considerable opprobrium. Despite the criticism it received, Gide regarded "Corydon" as his most important work. It was not published in English until 1950.

He followed "Corydon" with "The Counterfeiters" ("Les faux-monnayeurs") (1925), a complex novel within a novel ostensibly about fake gold coins but really about the nature of authenticity and originality. It is peopled with homosexuals and bisexuals. First published in "The New French Review," it was frigidly received, in part because of its homosexual characters, and in part because of its challenging structure. Over the years, however, its reputation has risen, and current critical consensus rates it highly. An English-language version appeared in 1927.

In 1924, he had published an autobiography, "If I Die." He wrote "Oedipus" in 1931 and "Theseus" in 1946. The two were jointly published in English in 1950, and are re-workings of classical Greek myths. He also authored nonfiction books and worked on his voluminous journals.

Politics had interested him. In 1896, he became mayor of a small commune in Normandy. In the 1930s, Gide became an admirer of Communism, but a visit to Russia disillusioned him.

By the time he received the Nobel Prize, he was regarded as one of the most important writers of the 20th century. But he was also considered a great moral threat in many quarters. Hence, the Roman Catholic Church placed his works on its "Index of Forbidden Books" in 1952.

Gide's exceptional literary merits - he earned accolades for the clarity of his prose - are matched by his accurate insights into homosexuality. He courageously refused to hide his nature. It would take the rest of the Western World many decades to acknowledge the truth of what he intuitively understood and eloquently postulated - that it is a natural form of sexual expression.