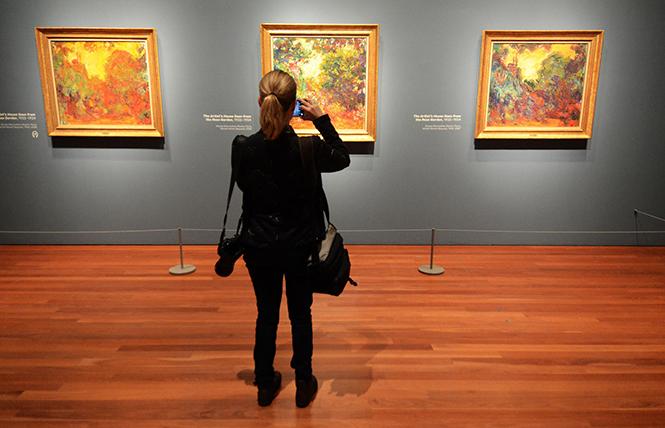 The received wisdom, at least for some, is that Impressionist master Claude Monet is too easy, but, as with all great artists, he only makes it look that way. One is reminded of his virtuoso technique and the exceptional luminosity and paradisiacal colors of his canvases in "Monet: The Late Years," a new show at the de Young that features nearly 50 paintings including more than 20 examples of his sublime water lilies. It's a companion to the museum's 2017 show "Monet: the Early Years," covering a time when, as difficult as it is to believe, he was a starving artist seeking success, recognition and a way out of poverty. The current exhibition finds the old Monet anything but settled in the last chapter of his life, beset by tragedies and recovering from a series of devastating losses: the death of his second wife, Alice, in 1911, followed by his eldest son in 1914; the horrors of WWI thundering near his heavenly estate in Giverny, and the onset of cataracts. The deteriorating eyesight that accompanied that condition terrified and frustrated him, and struck at the heart of how he expressed himself and perceived his environment. Undeterred, his woes and the specter of mortality sparked a burst of creative energy before his death in 1926 — he outlived fellow impressionists Degas and Renoir by a decade. Among the results of this prodigious period were immersive, mural-style panoramas of worlds one can get happily lost in — a group of them are permanently installed at the Musee de l'Orangerie, in Paris — and smaller, radically modern canvases painted with a feverish, almost fauvist intensity, some with a scarlet, desert yellow palette not usually associated with the artist. The show posits that a portion of these later works represent a venture into abstraction that lay the groundwork for 20th-century art. 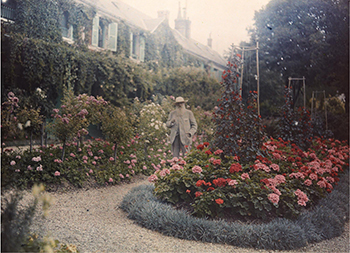 Anonymous, Monet in His Garden at Giverny (1921). Autochrome. Collection of the Troob Family Foundation. Photo: Courtesy of FAMSF

Monet's reputation and repertoire precede him. Relatively free of explanation, this spare exhibition lets the splendor of the paintings speak for themselves. Enveloped by his great canvases at the museum on a recent rainy morning, the work was a port in the storm, an oasis of staggering beauty where light glinted off water and flowers, and Monet's life-long genius for color, much imitated but unequaled, was on ravishing display.

Who could have created such an artistic legacy? At the entrance to the exhibition, a short black-and-white film shows the diminutive, white-bearded artist at work at Giverny. Seen in a straw hat at his easel, a cigarette dangling from his lips, his dog faithfully trotting after him, it appears he was just a man after all.

The introductory gallery featuring familiar early works from the 1890s serves as a prologue. It leads into a grand space that includes classic 3-by-4-meter water lily paintings in a rhapsody of cornflower blues, orchid, swooning violets, undersea greens and indigo, accented by exquisite salmon pink and peach blooms, each rapturous canvas lovelier than the one that preceded it. Though it's almost too much seeing this many Monets in a single setting, the aggregation allows one to detect subtle variations in brushstrokes and color; a discreet dab of mauve adds texture to a dazzling blue sky, a dusting of white in the upper register suggests clouds mirrored in a pool of clear water below. A series depicting the Japanese footbridge that arced over his famous lily pond, tended by a fleet of eight gardeners who, at Monet's direction, regularly dunked the lilies to keep the scene pristine, affords a similar opportunity. Some renderings are verdant with sylvan pathways through light and shadow enticing the eye into an enchanted glade. Another (1918-24), yellowish-green in tone and a contrast to the iconic one from 1899 executed in gorgeous teal, illustrates Monet's technique of combining two colors on the brush, the alchemy occurring the moment it met the canvas.

Monet branched out beyond lilies to other residents of his beloved garden in large-scale works such as "Roses" (1922-26), a tangle of thorny branches interrupted by deep red buds; and a long, rectangular mural of "Wisteria" (1919-20), an ode to spring in which the flowering vines hang in a lilac-suffused mist.

Comfortable financially and with nothing left to prove, he indulged his passion for the epic, producing works in a vast studio on his property completed in 1916. These monumental "Grandes Decorations," 14 to 20 feet wide, are a highlight of the show. They read differently up-close than from a distance, and reward close looking. Monet donated 300 linear feet of these canvases to France in 1918 in honor of those lost in the Great War.

The exhibition represents a full circle for Monet: he invented himself to launch his career and, after refusing to give up or give in to age and slings and arrows that would've slain a mere mortal, succeeded in reinventing himself at the very end.

Brace yourself for the crowds and the steep ticket price ($35); admission to heaven doesn't come cheap. Free Saturdays for San Francisco residents starts April 6, but doesn't apply to special exhibitions like this one.

Through May 27. Ticket info: www.deyoung.famsf.org