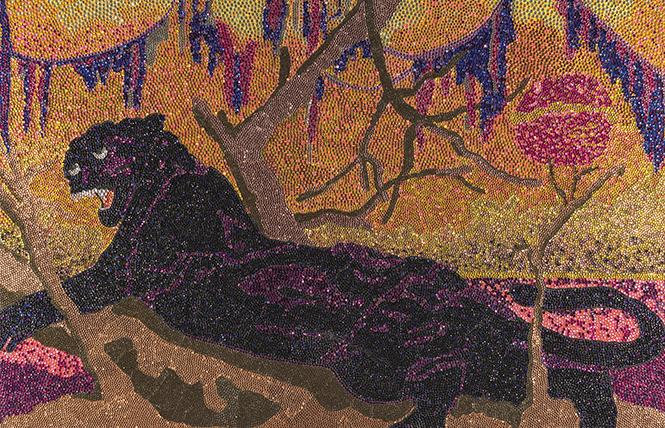 Harlem's temporary loss is a gain for San Francisco's Museum of the African Diaspora, the first stop for "Black Refractions," the largest touring exhibition The Studio Museum in Harlem has ever undertaken. The Studio Museum, a space devoted exclusively to artists of African descent and work influenced and inspired by black culture, opened its doors in 1968 during a period of social upheaval and political unrest marked by assassinations and civil rights and anti-war demonstrations. Since then, the community institution has amassed a permanent collection of more than 2,000 paintings, sculptures, drawings, watercolors, prints and mixed-media pieces, dating from the 19th century to the present, while offering a residency program that has produced 150 graduates. Now, as it awaits completion of a new expanded facility on the same site designed by David Adjaye, architect of the National Museum of African American History in Washington, D.C., Studio Museum has sent its precious artworks out into the world on a cross-country tour. 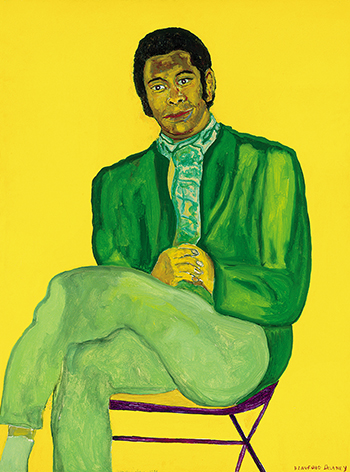 That turn of events has allowed MoAD to start off with a bang with one of the best shows of the New Year. Featuring 63 pieces and filled with bracing works from the 1920s onward, by an impressive roster of diverse artists, the exhibition never feels overstuffed; instead, the curators have taken care to give each object plenty of room to breathe. In the Studio Museum's early days, emerging black artists were largely shut out of the mainstream art-world. While fortunes have improved and profiles raised considerably for the majority of the 51 artists here, outside of aficionados of African American art and a handful of marquee names, this exhibition will be an introduction to talented creators whose acquaintance visitors will wish they had made years ago. Some, like Mickalene Thomas and Mark Bradford, have made a big splash. Bradford, who's gay, grew up in South Central where his mom's beauty salon was a gathering place and hub of activity. Appropriating its materials and part of the space for his studio, he began singeing semi-transparent permanent-wave endpapers and layering them on canvases in a horizontal grid pattern before applying acrylic paint, as he has in "Enter and Exit the New Negro" (2000), an early work that's on view. Thomas' dazzling "Panthera," created during her 2002-03 residency, shimmers and sparkles with a backdrop of glittering citron rhinestones; a slinky deep-purple-and-ebony panther, all stealth and bared teeth, claims the foreground. Thomas, an explorer of gender and sexuality, sees the panther as a cat with prowess and a symbol of black beauty, strength and femininity. In "Can't We Just Sit Down and Talk It Over?" (2006-7), one of her tableaux of black women lounging in colorful, cluttered 1970s interiors drawn directly from "The Practical Encyclopedia of Good Decorating and Home Improvement," she brings a jazzy nonchalance and hip, distinctly 1970s vibe that will leave visitors of a certain age nostalgic for their old disco LPs.

Even more laid-back is the gentle scene depicted in "Nwantinti" (2012) from Nigerian-born artist Njideka Akunyili Crosby. Now based in L.A., she paints large-scale works of intimate moments extracted from everyday life like this languorous interlude between a couple resting on a bed on a sunny Sunday morning, perhaps after they've just made love, his head resting on her lap, she tenderly stroking his hair as he gazes up at her face. The room they occupy is a cacophony of pink and burgundy patterns, from the rumpled linens to the busy wallpaper, contrasting with the stillness and calm understanding between them.

"Portrait of a Young Musician" (1970) by Beauford Delaney, who started his career in the Harlem Renaissance, is the essence of self-assured male cockiness decked out in apple green. Hands clasped politely on his lap and wearing a snazzy, head-turning suit and Cheshire grin, the up-and-coming subject is accentuated by an aura of bright yellow, the artist's signature hue.

Harlem Renaissance photographer James VanDerZee, whose portraits of cultivated African Americans in the 1920s are included in the exhibition, had a powerful impact on the artistic psyche of gay British filmmaker and installation artist Isaac Julien, whose impressionistic biopic "Looking for Langston" evoked the poetic ambience of that special time and place. Julien is represented by "Incognito" (2003), a life-like wax replica of pioneering blaxploitation director Melvin Van Peebles. Poised on a platform in mid-pontification, the natty figure seems so real it will trigger double takes among unsuspecting visitors. The sculpture appeared alongside the flesh-and-blood Van Peebles in Julien's 2003 film "Baltimore."

But this writer's greatest affection is reserved for the show's most unassuming, least flashy work, Bill Traylor's undated "Untitled (dog)." Traylor toiled in the fields as a sharecropper for the better part of his life before moving to Alabama, where, at the age of 84, he blossomed into an artist, making small-scale pictures like this one of a panting, tail-wagging canine, unceremoniously painted on the back of a Hershey's chocolate box. Just goes to show it's never too late to create.