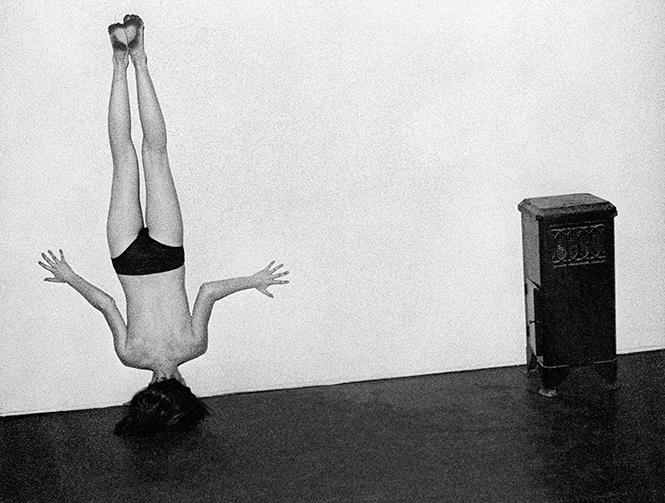 After rebelling against the constraints and realism of street photography in 1974, Steve Kahn commenced what became known as "The Hollywood Suites." The series began in rooms he rented in the Villa Constance Apartments, a seedy Melrose Ave. no-tell hotel in LA, where he shot pictures of professional bondage models. He had previously met some of his subjects, all of whom were sex workers, during a brief stint in S&M publishing that produced a single issue of the pornographic magazine "Photo-Bondage." But the LA-born Kahn, who settled in Berkeley in 2012 and died last year, soon trained his eye on their dingy, dilapidated workplace environments, the suites of the series title being a euphemistic term. More Sartre than S&M, the experimental project morphed into something existential in nature: a metaphoric, conceptual examination of the dimensions of psychological bondage, confinement, mental claustrophobia and the internal ties that bind. Fifty-eight of his staged, minimalist black & white photographs, along with contact sheets, Polaroids and multi-part images with a potent air of unreality, are now on view in a small but disconcerting show at the de Young Museum.

Kahn gives us the seamy underside of the Hollywood dream factory. This is not the LA of endless Pacific Ocean expanse, balmy sea breezes, Rodeo Drive glamour or sun-kissed movie stars, but of the harsh glare of Southern California light, torn, ill-fitting window curtains, scuffed doors, peeling paint barely concealed by kitschy art, and the imprint of long-gone mirrors on the walls of airless rooms devoid of life. 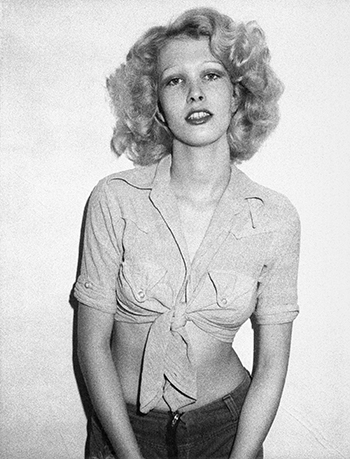 The first part of the show features portraits of models, nude and in various states of undress. "Nude 29" (1975), of a woman facing up against a wall, her spaghetti-strap cocktail dress unzipped to the waist exposing her naked back, is erotically charged, while another, of a nude woman whose upper body and face are covered in clear plastic, is just plain disturbing. The pictures are discomfiting to a 2019 sensibility, and Kahn was aware of the ire this body of work elicited from feminists at the time. He made statements that implied they failed to recognize that he and they were on the same page when it came to issues of bondage.

Kahn was at his most playful in "Acting Out" (1976), one of several multiple-image mural photographs included in a group of large-scale diptychs and triptychs. Comprised of a dozen Polaroids he later re-photographed with 35mm film and enlarged, its off-kilter angles and degraded surfaces hint something has gone awry. The piece captures a spectral, grainy figure, reminiscent of a Chinese shadow puppet, striking a number of poses as it moves across a room, slipping halfway out the door at the tail end, its presence presumably invisible to all but a privileged few.

It's fair to say that Kahn was obsessed with doors and windows, which can be perceived as barriers or portals depending on one's point of view. He once went so far as to create 17 variations of the same window, each shot with a different exposure time. Masked or exposing downscale urban streets, for him windows were yet another manifestation of alienation and entrapment. He was known to equate window dressings with female apparel or lack thereof, calling windows without curtains "de-frocked." One wonders what Dr. Freud would have had to say about this.

In what he dubbed his "No-Exit Scenarios" we are party to a private monologue emanating from his interior world, a one-way conversation apparent in a grouping devoted to thresholds, which are commonly freighted, in literature, horror movies and ghost stories, with superstition, fear and anxiety. Those apprehensions found expression in the artist's practice of binding doors with rope, eliminating any means of escape. For "Bound Door 6" (1976), for example, he took 23 Polaroids of a doorway obscured with dark fabric, and etched the chemical emulsion with marks mimicking strands of twine. He capped the elaborate process by stretching the rope across the passageway, pinning it to the wall on either side, then photographed the result. Like the scene of a crime, these shabby psychic landscapes compel our voyeuristic attention even as we stifle the urge to flee. You can check in, but you can't check out.